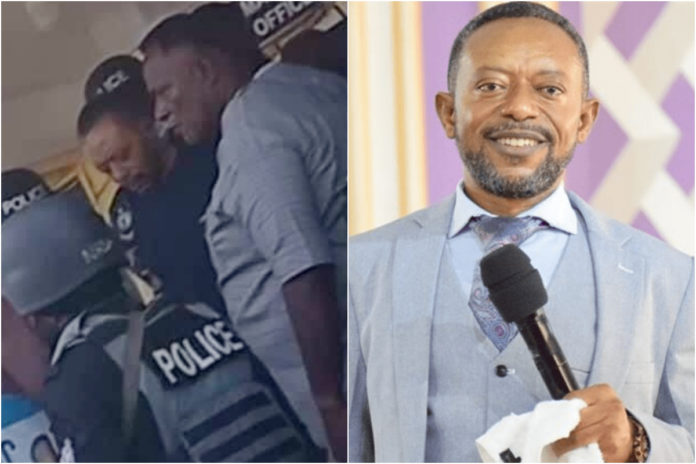 Reports coming in suggest that one of the body guards of the founder and leader of Glorious Word Power Ministries International, Owusu Bempah has reportedly assualted some of the journalists who headed to the court to cover the court hearing of the man of God.

It would be recalled that that the police picked Owusu Bempah up after he and his junior pastor stormed the house of former fetish priestess now turned Evangelist, Nana Agradaa. According to the video that came out, Owusu Bempah disclosed that he stormed Agradaa’s house after she threatened to deal with him.

Owusu Bempah who is now detained at the police station alongside his junior pastors for intruding into Agradaa’s house have been denied bail.

It was reported in the Midday news of Angel Broadcasting that the junior pastors were detained for further questioning over the creation and circulation of several videos threatening to kill Nana Agradaa and also holding in their hands weapons and also assualting a police personnel.

According to a reports on Angel FM, journalists were prevented from entering the court to cover the session. The reporter disclosed that a lot of journalists from other media houses and blog sites were maltreated by the agents and bodyguards of the pastor when they tried covering the court hearing.

READ ALSO: David, I Will Beat You Personally For Insulting Me, Report Me To The Police -Shatta Wale Loses His Cool

She added that anyone who was seen with a camera, a phone or a badge from a media house was harrased by the bodyguards of Owusu Bempah.

Bullet is The Manager In Ghana- Wendy Shay States Boldly