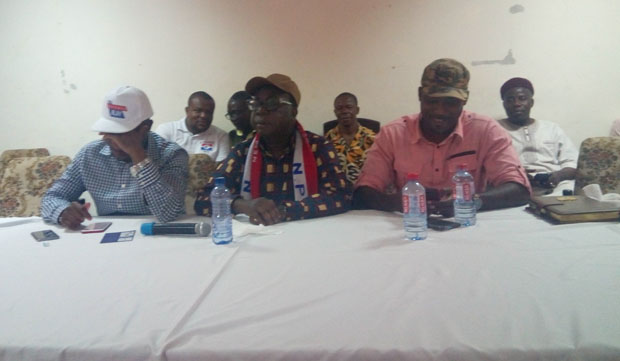 The National Executive Committee of the ruling New Patriotic Party (NPP) has declared the remaining days in the month of September for mass membership registration and updating of existing names in the party’s polling stations register.

General Secretary of the NPP, John Boadu, who disclosed this at a press conference last Friday, said the core requirement is for the individuals to promote and defend the good name of the NPP at all times and be loyal and truthful to the party and its policies.

“When you write your name, you will become an ambassador of the party, living and breathing the best of the NPP,” he added.

Mr. Boadu stated that such persons would have to share with their families, neighbours, friends and co-workers, what they see, feel and hear about the things the NPP is doing for the country.

“You will talk about the new road in your area, your child in SHS, your nephew employed as a nurse, your uncle selling his produce to the new 1D1F factory in your village,” he said, adding any member of the party would share his or her experiences from enjoying regular electricity, the easy renewal of your NHIS card and driving licence.

“You will talk about your new job with the Ambulance Service and how the digital address system makes it easy to help people. You will project the NPP everywhere you go. Then you will feel the satisfaction of being part of a party that cares deeply about people.”

“Persons wishing to join the party are equally requested to also visit their polling stations and provide their relevant details to be captured in the new polling station register,” he noted.

National Officers of the party, Ministers of State and all government appointees who are party members will all participate in this mass registration exercise by visiting their respective polling stations to get their details captured in the new register, he added.

“Ahead of this exercise, the party has already distributed polling station registers to all the 38,000+ polling stations in the country,” the NPP General Secretary pointed out, adding that “For emphasis, the party wishes to state emphatically that no prospective registrant shall be denied the opportunity to get his/her details captured in the polling register.”

“This registration exercise has nothing to do with polling station elections slated for January 2022. The party will, at the appropriate time, come out with separate rules and regulations for the conduct of the said elections,” Mr. Boadu said.

He explained that “this is just a mobilisation exercise for the over 6.7 million Ghanaians who voted for us in the last elections as well as persons who are impressed and satisfied with our policies, and accordingly wish to identify with the NPP.”

“This membership registration forms part of the party’s restructuring and reorganisation efforts towards breaking the eight-year governance cycle and thus ensuring a resounding victory for the party in 2024,” John Boadu affirmed.

“It is therefore anticipated that members of the party will accord this important exercise their maximum cooperation and support,” he continued.

He said the National Executive Committee approved the following dates and zonal arrangements for the regional annual delegates’ conference, and said the Savannah Region would have its conference in Damango on Friday, October 1, 2021, Upper West Region in Wa on Saturday, October 2, 2021, and Upper East Region in Bolgatanga on Sunday, October 3, 2021.

For Ahafo Region, the conference would be held at Goaso Pastoral Centre on Thursday, October 7, 2021, according to the NPP Chief Scribe, and added that the Bono Region’s one would come off in Sunyani on Friday, October 8, 2021.

The Ashanti Regional conference would take place in Obuasi West/Bekwai, Abuakwa, Ejisu, Kodie on Saturday, October 9 to Sunday, Oct 10, 2021, whilst the Western North Region would be held at Wiawso on Monday, October 11, 2021.

The Western Region’s own will come off in Takoradi and Tarkwa on Tuesday, October 12, 2021, Greater Accra in Tema at the WAEC hall and in Accra at GNAT Hall on Thursday, October 14 to Friday, October 15, 2021.

CamIdoh apologizes to Shatta Wale for disrespecting him » ™