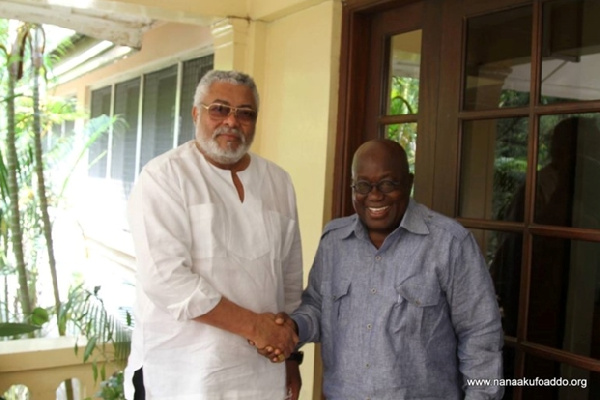 Jerry Rawlings is seen in this photo with President Akufo-Addo

• A historian from Akwamu says Akufo-Addo and Rawlings are related

The Akwamu State has made a near-unbelievable claim that the president, Nana Addo Dankwa Akufo-Addo, is a nephew of the late former president, Flt. Lt. Jerry John Rawlings.

According to the Chief of Staff and Curator of the Akwamu Museum, Nana Samanhyia Darko II, President Akufo-Addo, contrary to popular belief, is not an Akyem, but an Akwamu.

“Akufo-Addo is a royal in that house. The aunty was the queen mother before, and the sister is now a queen mother here. In the Akan system, we go seriously matrilineal, so Akufo-Addo, by all intent and purposes, is an Akwamu, a typical Akwamu.

“The grandmother migrated from here to marry in Akyem, so, to Akyem he is a grandson to the stool, but here [Akwamu] he is a royal. So, I say emphatically he is not an Akyem,” he insisted, a report by myjoyonline.com has said.

According to the report, the Akwamu historian also revealed a fascinating familial link between President Akufo-Addo and the late Former President, Jerry John Rawlings, stating that they are related.

He claimed that the late mother of the late former president, Victoria Agbotui, hails from the same royal house as the sitting president’s maternal grandmother.

“Rawlings’ mother is from the very house as Akufo-Addo’s grandmother. The Agbotui, Kugblenu and the Hayman’s from Keta are all from this royal house [in Akwamu]. It is a fact…I saw Rawlings, and I asked him. Are you not an Akwamu and he said, ‘I am an Akwamu,” he added.

Nana Samanhyia noted that the Akwamu State can boast of leading the liberation of black Africans through the Asamani who captured the Christiansborg Castle during the colonial era.