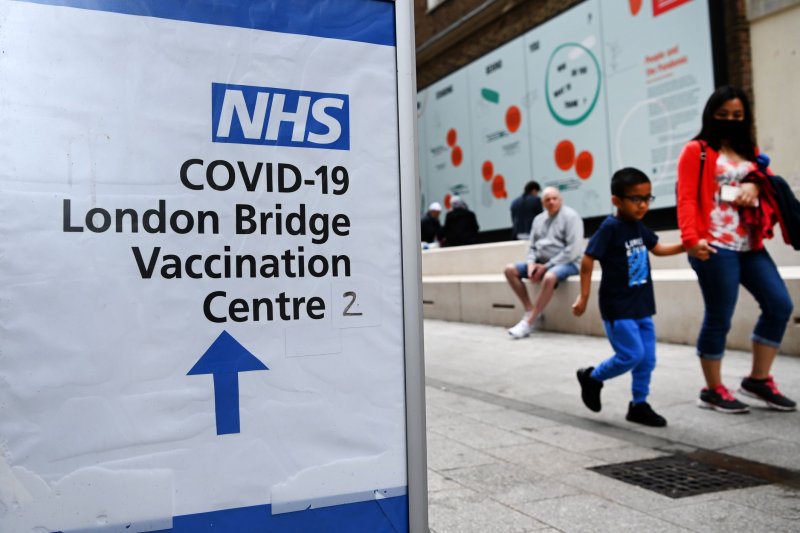 Sept. 12 (UPI) — Europe reported a 3% weekly increase in COVID-19 deaths, fueled by a spike in Great Britain, with all other continents recording fewer fatalities than the week before.

Overall deaths worldwide declined 10% to 58,649 with the total toll on Sunday at 4,643,673, according to tracking by Worldometers.info. Cases globally declined 15% in one week with the total 225,449,263 with every continent reporting declines.

Europe, however, leads in the vaccination effort with 102 doses administered per 100 people, followed by North America at 98, South America at 90, Asia at 81, Oceania at 65 and Africa at 8.7, according to tracking by The New York Times. Most vaccines require two shots with boosters also occurring.

Worldwide, vaccination doses grew by 230 million in one week to 5.69 billion with the world’s population of 7.9 billion, according to tracking by Bloomberg.

Though facing a new wave of the pandemic in the winter, Prime Minister Boris Johnson plans Tuesday to unveil a blueprint in England to prevent going into a full lockdown, including shutting schools and pubs again. Most of the restrictions were lifted on July 19.

And powers expected to be repealed under the Coronavirus Act include those allowing the closing down of the economy, imposing of restrictions on events and gatherings, the power to temporarily close or restrict access to schools and detaining infectious people.

“These extraordinary times required necessary but intrusive measures,” Johnson said. But I’m determined to get rid of any powers we no longer need because of our vaccine defenses.”

He reportedly plans to roll out plans for booster shots but had scrapped plans for vaccine passports.

The 27-nation European Union launched the vaccine certificate, which allows for free movement of travelers between its countries though each nation can implement restrictions.

People who have been fully vaccinated can visit England without needing to quarantine.

The EU has recommended removing the United States from its “safe travel” list, meaning American travelers would face restrictions that include quarantine and testing. It is up to each nation to implement the change. Israel also was added to the list.

The United States continues to have a travel ban for European travelers since one year ago March with a quarantine, including being fully vaccinated.

Coronavirus remains at a high level in Russia, which reported 788 deaths Sunday after a record 820 on Aug. 26 with 819 on Aug. 14. Cases were 18,554 compared with the record 29,935 in December. In the past week, the increase in deaths was virtually unchanged and cases declined 2%.

Russia had the most deaths in Europe last week: 5,554, also second behind the United States.

On Friday, Denmark became the first nation to lift all remaining restrictions, including requiring vaccination passes to end restaurants, sports centers or nightclubs.

“The vaccines and the great efforts of all of Denmark’s citizens over such a long period are the foundation for why we are going strong,” Health Minister Magnus Heunicke wrote on Twitter last week.

Although India is a prime manufacturer of vaccines, the nation has only vaccinated 40.4% of its population with at least one dose and 12.5% fully.

The highly contagious Delta variant was first detected in India last October and has become the dominant strain worldwide.

India is better prepared to stop new waves, according to Dr. Soumya Swaminathan, chief scientist at the World Health Organization.

“What is needed also is to ramp up the health workforce because it’s not enough to just have the equipment and the materials and the drugs. We also need trained nurses, doctors, anesthesiologists, critical care technicians and others.”

Indonesia’s vaccination rate is 26.7% for one dose.

In Japan, where the Tokyo 2020 Summer Paralympics ended one Sunday, cases continue to remain higher than earlier in the pandemic. On Sunday, infections grew by 7,212 for a total of 1,641,688 with a record 25,492 four weeks ago.

Despite the surge, Japan’s case percentage is lower than elsewhere.

But Japan is lagging in vaccinations with 62.4% of the population getting at least one dose but it has reached 50% for fully vaccinated, according to tracking by Bloomberg.

The state of emergency, including a soft lockdown, already was extended in Tokyo and 21 of the 47 prefectures from Sunday until the end of this month.

“We have to prepare for new waves of infection but at the same time go forward with social and economic activities while living with the coronavirus,” he said Thursday in a news conference, his first since announcing last week his intention to resign, amid mounting criticism of his government’s handling of the pandemic.

The pandemic began in late 2019 in Mainland China, but the nation has reported only a few deaths in the past 12 months and stands in 76th at 4,636 behind Lithuania with 4,688. China added 46 cases Sunday.

But Putian, a city of 2.9 million people in Fujian province south of Shanghai city, is attempting to contain a coronavirus outbreak. Bus and train service has been suspended, and cinemas, bars and other businesses are closed.

China, with the world’s biggest population at 1.5 billion, administered more than 2.1 billion doses, the most in the world and dwarfing India with nearly 743 million and the United States with more than 378 million, according to tracking by Johns Hopkins University.

In Putian, 19 new infections that were believed to have been acquired locally were reported in the 24 hours through midnight Saturday, according to the National Health Commission.

Public venues and businesses were closed, and public transportation was suspended.

South Korea’s social distancing restrictions have been extended to Oct. 3 with a Thanksgiving holiday later this month.

President Moon Jae-in’s office said once 80% of adults have received both doses, including 90% of people aged over 60, restrictions on daily life could be eased.

South Korea’s rate is just 45% for fully vaccinated among adults.

Among the total population it is 63.4% with at least one shot.

Despite the good vaccination rate, Israel has one of the world’s highest infection rates: 125,372 per million people.

Sharon Alroy-Preis, head of public health at the Health Ministry, told Channel 12 news the vast majority of those in serious conditions at hospitals are unvaccinated and under 60.

“If you look at the difficult and critical patients, you definitely see a slowdown [in the rates] and that’s what we’ve been waiting for,” Alroy-Preis said in the interview.

Israel has been administering booster shots with a fourth one planned.

Canada’s deaths rose 24% over seven days but only 161 were reported.

Canada has the best one-shot vaccination rate of the three largest countries in North America at 74.7%. Mexico’s percentage is 47.2%, though it was the first Latin American nation to begin vaccinating people.

“Now the situation has cooled across South America,” said Carla Domingues, an epidemiologist who ran Brazil’s immunization program until 2019, told The New York Times. “It’s a phenomenon we don’t know how to explain.”

No new sweeping or large-scale containment measures have been put in place on the continent.

The World Health Organization reported this is the biggest decline in two months.

“While COVID-19 cases have declined appreciably, the downward trend is frustratingly slow due to the lingering effects of the more infectious Delta variant,” said Dr. Matshidiso Moeti, WHO regional director for Africa, in a news release. “We are spearheading critical work and supporting countries in scaling up pathogen surveillance through genome sequencing to detect and respond effectively to COVID-19 variants.”

South Africa has vaccinated just 18.1% of its population with at least one shot.

Africa has 16.72% of the world’s population but its share of vaccinations is 2%.

New Zealand’s deaths increased by one to 27 on Saturday after one the previous week, the first reported since Feb. 16. Australia’s toll increased to 1,091, with seven reported Sunday and 48 in a week.

New South Wales remains under lockdown. Police and military personnel in Sydney have been issuing fines to those contravening health orders, such as wearing masks.

Restrictions will be lifted for fully vaccinated people in New South Wales once 70% of the nation 16 and older reaches that status, which is projected in late October.

Victoria, which includes Melbourne, has been in lockdown since June 26.

Victoria Premier Daniel Andrews has said lockdown restrictions in Melbourne will not be eased minimally until 70% of the adult population has received at least one vaccine dose. That target date is Sept. 23 but full vaccination is not projected until the end of December.

Guam, a territory of the United States with fewer than 200,000 residents, has 159 deaths and 11,199 cases, including 67 Saturday. Guam is on the Centers for Disease Control and Prevention’s highest travel risk level of 4 along with the U.S. Virginia Islands with 65 deaths and 6,250 cases. Countries include Brazil, Britain, France, Iran, Israel, South Africa.