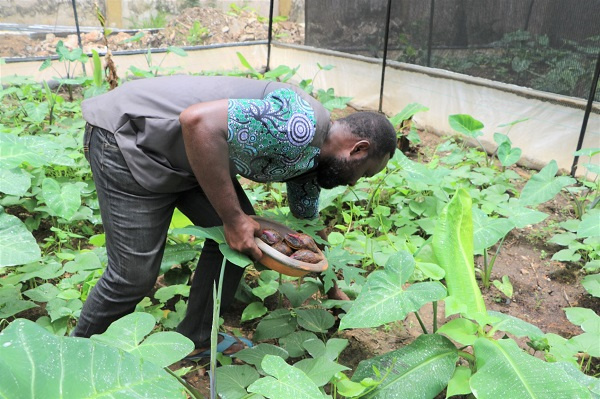 About 1,500 farmers and agricultural extension officers nationwide, for the past three years, have been trained in snail farming, the Deputy Director of the Council for Scientific and Industrial Research (CSIR), Professor Paul Bosu has disclosed.

Speaking at a day’s training to highlight the agribusiness potential of snail farming and its economic benefits on Saturday Prof. Bosu said the initiative was to equip selected individuals with basic snail farming technologies.

The workshop was jointly organized by CSIR and the Ministry of Food and Agriculture (MoFA) in the Eastern Region.

Prof. Bosu said snail rearing was a lucrative business because they were seasonal creatures that had no end and that the only way to ensure its sustainability was to encourage its rearing.

He pointed out that apart from using snails for food, it also had medicinal value.

The Deputy Director said the Council was poised to enable the average Ghanaian to embrace and appreciate what science could do to turn fortunes around.

The institute, he said, would not relegate to the background its core values but would enforce them to the benefit of all and sundry in Ghana.

“Our dream is to develop capacities and partnerships because the knowledge we produce enables governments, partners and boundary partners to make an informed decision toward development” he stated.

Prof. Bosu said due to the high nutritional value of snails they were attracting high patronage and therefore the need to help farmers to expand their farms to increase production and to also target the international market.

“It is no longer viable to be glued to the outmoded methods of farming and that was why CSIR and partners would collaborate to support young farmers to purchase modern farming equipment to get high returns on investment” he added.

Kwame Sarfo Bonsu, Chief Technical Officer CSIR-Forestry Research Institute of Ghana in his presentation called for an increase in snail farming to make up for the shortage in its supply in recent times.

He explained that the high consumption of snails served as a major farming activity to boost the nation’s protein supply and also served as a disincentive for setting bushfires in order to conserve the region’s natural vegetation.