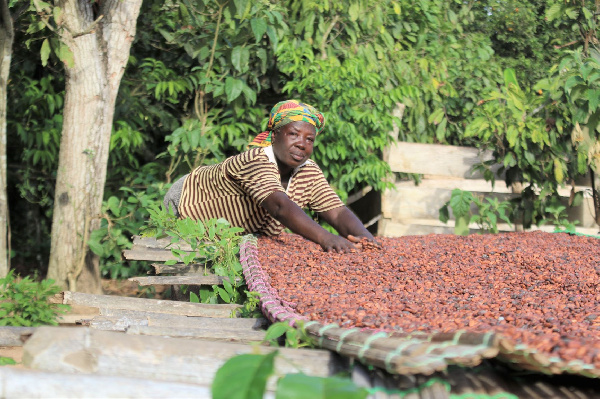 The Cocoa Merchant Ghana Limited (CML) plans to disburse a premium amount of GH¢1,080,000 from Nestle through the Beyond Beans Foundation for the purchase of 4,500 metric tonnes of Rainforest Alliance-certified cocoa beans for its farmers for the 2020/21 cocoa season.

The tonnage of the cocoa beans purchased for the Asante Bekwai and Nsokote A and B cocoa districts for the main crop cocoa season translates to 72,000 bags from a total of 4,511 cocoa farmers.

According to the Managing Director of CML, Alhaji Abdul Fataa Adamu, the company has since 2013 been implementing a sustainable cocoa programme that aims at improving the incomes and livelihoods of cocoa farmers and farmworkers. This is being realized with the implementation of UTZ and Rainforest Alliance certification standards and new initiatives for the value-added market.

The move follows the global stakeholders’ concern on a number of developments within the cocoa production industry; including the need for a more sustainable cocoa sector that also addresses conditions of farmers and farmhands as well incidents of child labour.

“Due to our good work, Nestle – through Beyond Beans Foundation – adopted CML’s Asante Bekwai, Nsokote A and Nsokote B cocoa districts to produce and deliver good rainforest-certified cocoa beans,” he said.

It is through the partnership which helped train the cocoa farmers to become Rainforest-certified that total purchases of cocoa beans were realized for the main crop season. During the period, some 20,000 shade trees and 70,000 cocoa seedlings were raised and distributed to cocoa farmers in Nsokote district. Also, farmers in Asante Bekwai benefitted from 11,100 shade trees and 81,350 cocoa seedlings.

The Managing Director, who was addressing a gathering of cocoa farmers and staff of CML at Anwona in the Adansi South District of the Ashanti Region, also noted efforts have been made to partner with another organization to provide land and tree tenure documentation for farmers in Nsokote.

“It has also led to the production of cocoa juice with farmers in the Banko community at Asante Bekwai; and the construction of seven demonstration farms with four of them in Nsokote district, while the remaining farms are in the Asante Bekwai district.”

He recognized the work of farmers and staff of CML, and entreated them to continue strictly observing all the COVID-19 preventive protocols.

The Global Innovations Manager of Beyond Beans Foundation, Marjolijn Hekelaar – also speaking at the ceremony to launch the premium, stressed their commitment to help improve the livelihoods of cocoa farmers. She said their partnership with CML to promote and achieve sustainable cocoa production has existed since 2016. “We are in partnership together, working as one team toward the same goal – which is more sustainable cocoa and better livelihoods for cocoa farmers,” she observed.

The cocoa farmers were also encouraged to continue adopting good agronomic practices that will boost their cocoa yields. To get quality beans from their production, the farmers were also advised to only plant seedlings provided by the Ghana Cocoa Board – Cocobod, as well as properly dry the cocoa beans after harvesting.

Cocobod also announced the start of piloting the Cocoa Pension Scheme to the farmers, which will take off from October 1, 2021 beginning from the New Edubiase district and targetting 28 communities.

MD of CML, Alhaji Abdul Fataa Adamu, right, support by officials of Nestle and Beyond Beans Foundation to launch the premium for the 2020/21 cocoa season.