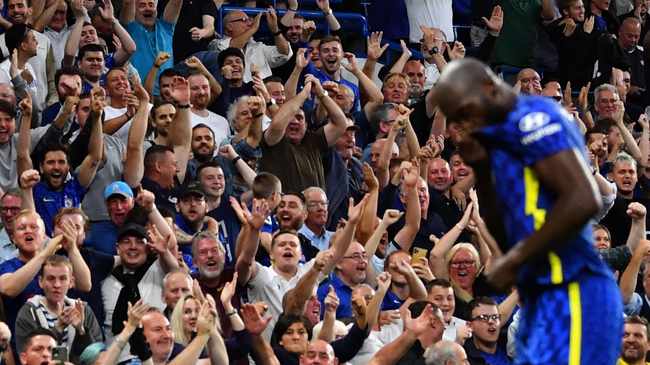 LONDON – Chelsea beat Aston Villa 3-0 on Saturday for their 600th Premier League victory to move joint top of the standings alongside Manchester United after Romelu Lukaku and Mateo Kovacic scored for the first time at Stamford Bridge.

Lukaku, who previously played for United, Everton and West Bromwich Albion, had never scored at the ground — even during his first spell with Chelsea. But he got off the mark in his 15th appearance at the stadium when he opened the scoring.

In the 15th minute, Kovacic slithered past Villa’s midfield and released Lukaku with a ball that split the away side’s defence. The Belgian striker sent defender Axel Tuanzebe the wrong way before finding the bottom corner.

Lukaku got his second in stoppage time when Cesar Azpilicueta found the striker at the edge of the box where he unleashed a left-footed strike that gave Steer no chance.

“(Lukaku is) full of confidence and fully aware what he wants to do,” Chelsea manager Thomas Tuchel told Sky Sports.

“He takes the last decisions and is absolutely confident of scoring, so he’s helped us a lot. We escaped with the perfect result, perfect evening for our striker.”

Kovacic got his name on the scoresheet three minutes into the second half when the Croatian midfielder pounced on a poor back pass from Tyrone Mings, chipping the oncoming goalkeeper Jed Steer to double the lead.

Villa had their chances to score, especially in the first half, but Edouard Mendy had a stellar game in goal, making numerous saves to ensure he kept his third clean sheet in four matches.

Ollie Watkins nearly levelled the score when he rounded Mendy but had his shot blocked by Thiago Silva who threw his body in the way to deny a certain goal.

Mendy was kept busy as Villa pressed for a first half equaliser, with the goalkeeper making a fine double save when he first denied Mings’ stinging effort before leaping off the floor to make another diving save off Ezri Konsa.

“It was a strong Aston Villa side. They were well prepared, they looked very sharp from the start and very confident,” added Tuchel, who made six changes to the starting line-up from their draw with Liverpool.

“They caused us a lot of problems, particularly in the first half. They’re dangerous from throw-ins, set pieces and corners, and gave us many situations you have to defend… The second half was better, we had more control.”

Ghanaians urged not to worry about the future of Ghana football

I Turned Myself In, I Wasn’t Caught