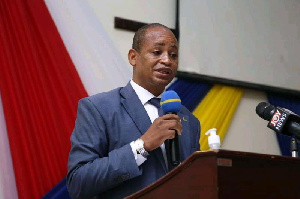 Acting Registrar of the Medical and Dental Council of Ghana, Dr Divine Banyubala

There is a raging debate about whether patients are in the position to ‘advice’ and opt for modes of treatments they should be given by medical practitioners or not.

Very often, families of patients get into misunderstandings and tug of wars with doctors about the type of treatment that should be rendered to them.

This is especially so during pregnancy and childbirth and other cases involving other critical conditions.

But wading into the conversation, Acting Registrar of the Medical and Dental Council of Ghana has intimated that, patients do not have the right to determine the kind of medical treatment they should be given at health facilities.

Speaking on JoyFM’s Super Morning Show, on Friday, September 10, Dr Divine Banyubala noted that at best, patients can only choose from options prescribed to them by the supervising doctor.

In an interview with host Mamavi Owusu Aboagye, Dr Banyubala explained that,

“…Often, the mistaken assumption is that because patients have a right to choose from options prescribed to them, it means that he/she has the right to determine what they want, but it is the profession that determines that these are the appropriate treatment modalities for this particular condition at this point in time in medical science.

“…Then from those options, the patient, given the critical information about the pros and cons of each, can then exercise the choice that it is option A rather than B. But a patient can’t dictate to the doctor that this is what I want…

“Your right to choice is subject to the medically appropriate options at the time.”

He was reacting to the issue of clinical negligence by medical practitioners in the country.

The host had asked him to clarify the stance citing a case in November 2015 at a public hospital resulting in the death of a woman after she had delivered her baby.

The patient had been hospitalised with pregnancy-induced high blood pressure and as a result, the couple opted for caesarean section.

The doctors however refused and decided to do a vaginal delivery, resulting in the successful birth of the baby but loss of life of the woman after she bled out.

Maintaining his stance, Dr. Divine Banyubala noted that the doctors were in the best position to decide which modality to employ.

Although he admitted not knowing the full facts of the matter that led to the death of the 27-year-old woman at the facility, he said that it should not be used as the norm where patients go to doctors suggesting treatment methods.

“…that should be separate from saying that I can just walk to the hospital and say this is the medicine I need. I have this condition and this is the treatment I need, even when that treatment has not been indicated.

“…that will be very wrong appreciation of what medical jurisprudence or medical laws… is about,” he added.