Young Pitch Invader Faces Ban For Selfie With Depay, Fine Cut By £300 To £86 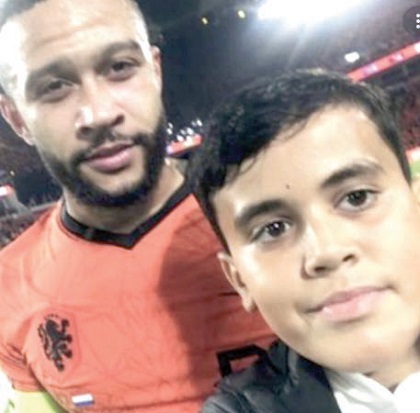 A 13-year-old boy has been banned from the Philips Stadion in Eindhoven after running onto the pitch to take a picture with Memphis Depay during Holland’s World Cup qualifier with Montenegro.

The young boy – called Amin – jumped over the railings in the 89th minute of Holland’s 4-0 victory and sprinted out onto the pitch to pose for a photo with the Barcelona star.

He was subsequently handed a five-year match ban and a £300 fine. However, that sum was later cut to £86 as Amin’s age was taken into account.

The incident came shortly after Virgil Van Dijk was approached by a pitch invader during his post-match interview on September 1.

Van Dijk was in front of the camera’s discussing the Netherlands 1-1 draw with Norway when a hooded man run up next to him and tried to take a selfie.

The Dutch defender was visibly annoyed by the situation and pushed the fan out of the picture – encouraging security to deal with the problem.

Some believe this man’s actions inspired young Amin to try his luck in Holland’s clash with Montenegro.

Having successfully made his way onto the pitch, 16 other fans followed Amin’s lead and scrambled over the railings.

As a result, Amin’s parents were contacted by the Royal Dutch Football Association to state that he would be banned from the stadium for five years.

His mother, Naima Chahman, admitted that it was never their intention for Amin to run onto the pitch following the game.

Neverthless, Theo Pouw – the chairman of the Supportersclub Oranje – believes the ban is justified. He told RTL Nieuws: “They can only give a stadium ban. So I can agree with it.”