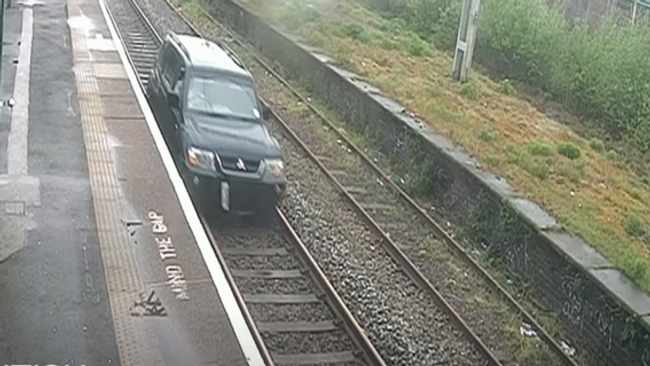 BIRMINGHAM – What do you do when your driver’s licence is suspended? If you’re as senseless as the 31-year-old in the video below, you might just take to the tracks – on your way to jail that is.

After being caught on camera and leaving some evidence behind, the British motorist was sentenced to 15 months imprisonment for driving a Mitsubishi Pajero down a railway line near the Duddeston station.

According to the British Transport Police (BTP), the man was found guilty of endangering people on the railway as well as dangerous driving, driving while disqualified and using a vehicle without insurance.

Prosecutors said the man drove the SUV through a gate at the Duddeston station and then drove 800 metres down the track before abandoning the vehicle and fleeing the scene. He didn’t, however, think of taking his cellphone with, and police were able to use this to track him down.

According to police, the stunt caused over £23 000 (R450 000) worth of damage to the track, while train passengers faced delays of up to eight hours.

“This was an immensely dangerous and senseless act by O’Halloran which caused significant risk to passengers and damage to the railway,” said Detective Inspector Raymond Ascott. “The sentence handed to him reflects the severity of this crime and we are thankful no one was injured as a result of O’Halloran’s alarming behaviour.

“He’ll now have plenty of time to reflect on his idiotic actions in prison.”