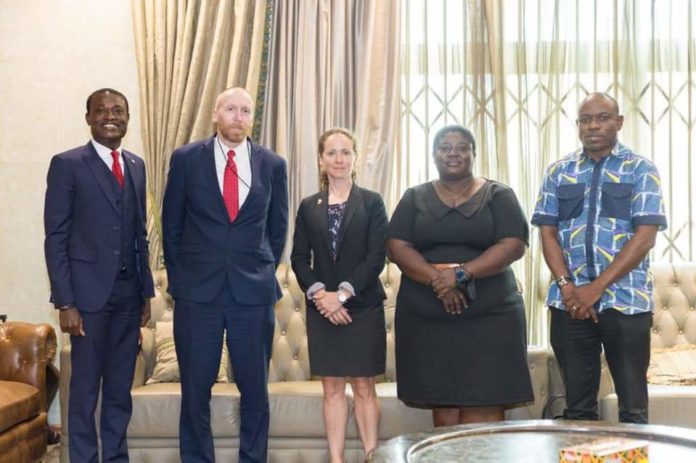 The Special Prosecutor, Kissi Agyebeng has been furnished with a new and permanent office complex offered by the state about two years ago.

Staff of the Office have permanently moved from the previous office in Labone to its new location at 6 Haile Selassie Avenue, South Ridge in Accra near Parliament House.

These offices to be occupied by the newly appointed Special Prosecutor are fitted with a holding cell.

The ten-storey office complex also comes with a sick bay, an intelligence unit and a forensics laboratory.

Kissi Agyebeng, the Special Prosecutor, told officials from the US Department of Justice and the Bureau of International Narcotics and Law Enforcement Affairs (INL) stationed at the US Embassy in Accra who paid a courtesy call on him on Wednesday September 1, 2021 that he was running against time to move into the ten-storey.

The meeting centred on capacity-building and mutual legal assistance for the new Office of the SP.

Agyebeng told the delegation that the office will require training in the areas of intelligence, investigation, prosecution and asset tracing and recovery as it gets ready to recruit.

The US Embassy resident legal advisor, Bill Houser, described Agyebeng as the ideal man for the SP’s job, considering his academic qualifications and experience.

He’s collaborating with the Attorney-General, Godfred Yeboah Dame to get substantial logistics and to recruit staff for what will be a critical anti-corruption institution.

The Office of the Special Prosecutor Act 2017 (Act 959) mandates the SP under Section 3(f) to co-operate and co-ordinate with the attorney general and other competent authorities in Ghana and abroad in performing his duties.