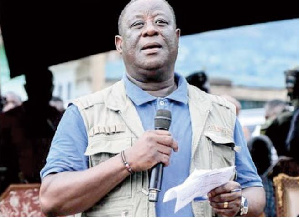 Residents of Sandema, the Builsa North Municipal capital of the Upper East Region, have urged engineers to use their expertise to save the mahogany trees, which the road from the Apipi Junction to Suwarinsa, in their bid to expand the road to prevent flooding.

They say the trees are important because they serve as a canopy to those who walk along the road, especially at the peak of the dry season.

“In this part of the country, especially in the months of April, May and even February, when the sun scorches so hard, it protects us from the sun,” said Mr Simon Gibson Achavuusum Anuegabey, an independent Parliamentary Candidate in the 2020 Builsa North Constituency election, in an interview.

Mr Kwasi Amoako-Attah, Minister of Roads and Highways, on his recent visit to the Municipality, said as part of the measures to avoid the perennial flooding of Sandema, it may be necessary to cut down some of these trees to widen the road.

“We all know the importance of trees, and it is not for pleasure that we should cut down some of these trees,” he stated while urging community engagement on the matter.

In an interview the Ghana News Agency (GNA) conducted to sample opinions among the public, many residents said cutting down the trees should be the last resort to solving the problem.

Some, however, said the technocrats should make the decision in the best interest of people.

Mr Anuegabey said the trees served significant purposes in Sandema, and residents needed to be convinced beyond reasonable doubt that there was no better option than to cut them down.

“We necessarily don’t want the trees to be cut down, but if the trees should be cut down for the road to be constructed, then we will accept it but – only if we are convinced after proper engagement with the technocrats.”

Mr Issaka Awoneirim, a Mobile Money Vendor, operating under one of the trees, told the GNA that the trees added to the aesthetic appeal of the town.

“We can agree to an extent and also disagree on the proposal. They may cut the trees down but the work may not also be done. That is my worry, he said.

“If the trees will be cut down, and the road is constructed, I have no problem. But in a situation where they fell the trees and abandon the project, I will not support that.”

Another resident said the floods had worried them over the years and any permanent solution to the problem was welcoming news.

“The floods are actually worrying us,” he emphasised.

The Assembly Member for the Wiak Wabilinsa Electoral Area, Mr Roland Ajiabadek Apindem, said the mahogany trees were more than 60 years, therefore, a proper stakeholder consultation must be undertaken regarding the project.

Mr Apindem said if there was a stakeholder engagement when the contract was last awarded in 2016, and the decision had been made to fell the trees, “We should have started planting new trees beyond the road by now.”