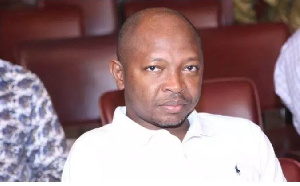 Former Kumbungu MP, Ras Mubarak, and his ex-wife, Rasheeda Adams, are at each other’s throats once again.

This time, the former lovebirds are arguing over the school fees of their two young daughters.

Ras Mubarak received a private message from his ex-wife, threatening to change the names of his kids as well as their passport after paying GH¢10,000 out of GH¢63,000 as fees.

She further indicated that if Ras Mubarak refuses to pay the remainder, then he should be ready to be in court.

According to Mubarak, for the past four years, his ex-wife has been changing schools of the girls yearly without telling him but refuses to pay admission fees because he had never been consulted with the changing of the schools, yet, he has been paying their school fees.

“A woman who has changed 4 residences in 5years, changed 4 schools in 4years without consulting or at least agreeing with the father who pays the children’s fees…For the record, In all the kids’ previous schools (Brainy Bairn, Dolly Memorial, Victoria Grammar), any journalist interested in the truth can go find out how my daughters’ fees were paid. As a responsible father, I paid every Cedi or dollar with my sweat, but of course, as a matter of principle refused to have anything to do with admission fees as I was not consulted about the changes in school and or my concerns completely ignored,” Ras Mubarak wrote on his Facebook timeline.

He continued, “on this latest school she took the kids to where an admission fee is over twenty thousand cedis per child, I would again not pay a dime in admission fees since phony Ms. Adams decided to be a “rich girl.” For someone with a notorious and ignoble record of changing kids’ school every year and three months, I won’t throw away my money. Moreover, I would not be forced to pay for something I cannot afford. Unlike phony Ms. Portia Adam, I don’t live a fake life.”