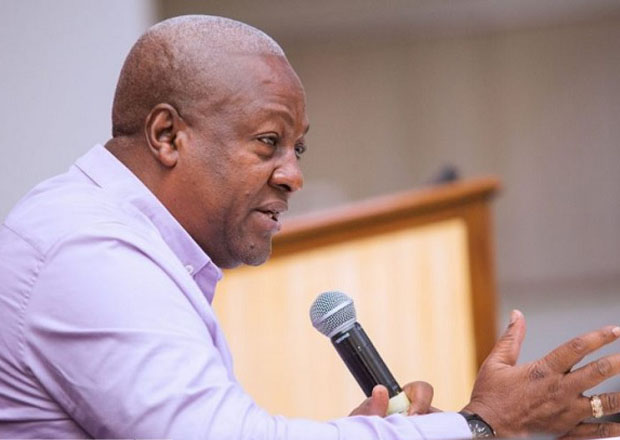 Former President John Dramani Mahama is laying claim to the much-talked-about Planting for Food and Jobs (PFJ) programme which the Akufo-Addo-led New Patriotic Party (NPP) initiated in 2017 as part of measures to ensure food security in the country.

He said he started the programme and his opponents, the NPP, came in and changed the name to PFJ and are taking credit for it.

Similar to the claims he made on the free SHS last year when the 2020 general election was approaching, Mr. Mahama said it was the NDC’s programme which they started with funding from the government of Canada for the agriculture sector.

His sensational PFJ claim is coming in the wake of his ‘Do or Die’ threat ahead of the 2024 election, which many have condemned, but he had justified and decided not to offer any apology for it.

Speaking in Dormaa in the Bono Region on Wednesday during his ‘Thank You’ tour, Mr. Mahama said specifically that “before this government came in, we had an arrangement with Canada. They were giving us funding for agriculture because they had realised that it was the sector creating more jobs.”

When they came into office, they named it PFJ. It was originally a programme that we were working on. They just came and continued it.”

He then said the Planting for Food and Jobs initiative has failed and that there is going to be food shortage in the country next year.

“Planting for Food and Jobs has failed. There will be famine in Ghana next year. The Canadian funding has been exhausted and we need to find alternative funding to sustain the programme but there is no money at the Ministry of Finance.”

He said that “prices for food crops are going up astronomically,” adding “one of my siblings is a farmer. He is telling me this year there is no fertiliser. He had to buy his own fertiliser and a bag of fertiliser is expensive now. He normally cultivates 300 acres of maize but this year he had to reduce it to 80 acres. It shows that there is going to be hunger because the PFJ has failed.”

The Minister of Food and Agriculture’s Press Secretariat reacted to the former President’s claims, saying “Ghana is not facing food shortage. Planting for Food and Jobs (PFJ) is very much on course.”

“Our attention has been drawn to rather unfortunate comments by the former President, Mr. John Dramani Mahama, on his ongoing campaign tour across the country. The former President, in an attempt to shift public discussion from his rather reckless and infamous ‘Do or Die’ comment which has attracted public backlash, has decided to attack one of government’s most successful flagship policies Planting for Food and Jobs.

“In fact, apart from becoming desperately notorious for making reckless comments in recent times, the former President is now also engaging in scare-mongering, thriving on lies and falsehoods just to put fear in Ghanaians,” the statement said, adding “in a meeting in the Bono Region, former President Mahama is on record to have made several false claims about the PFJ programme which was introduced by the President Nana Addo Dankwa Akufo-Addo-led administration in 2017.”

The statement said that “this grant from the Canadian Government under the MAG programme, was supposed to be released in four tranches, over a four-year period. This translated into 25million Canadian Dollars every year,” adding “however, it is instructive to note that since 2017, Government of Ghana has spent over $400m Dollars on the PFJ, expenditure of which had gone into subsidies of improved seeds and fertilisers for farmers.”

The ministry said that the advisors of former President Mahama failed to explain to him the real story behind this Canadian Grant which it said “had strict expenditure plan,” adding that “the funds could not be spent on any other programme apart from extension support.”

“It must also be stated that the previous administration of the NDC led by Mr. John Dramani Mahama, left the agriculture sector in a state of moribund and comatose,” the statement said, adding “Ghana was importing virtually every food item; including thousands of tonnes of maize, plantain, banana etc. from neighbouring countries.”

“Available data in 2016 indicates that Ghana imported about 113,855 and 79,771 metric tonnes of maize respectively in 2015 and 2016, and same could be said of other major staple foods such as yam, plantain and soyabean. The food situation of this country was so bad that farmers could not afford fertiliser for their crops, leading to low yields.”

It said, “Planting for Food and Jobs therefore, came to reverse this trend and by the end of 2017 and mid-2018, Ghana became the hub of food supply in the West African sub-region. In fact in 2017, a total of 81,193 tonnes of food items including maize, yam, rice, plantain and soyabean were exported to neighbouring countries. This trend has continued up to now.”

The statement said that “Ghana has since 2017 gained international recognition for its success in revamping the agricultural sector. Global organisations such as World Bank, Alliance For Green Revolution Africa (AGRA), African Development Bank (AfDB), Food and Agriculture Organisation (FAO), amongst others, have all commended Government of Ghana for the implementation of  the Planting for Food and Jobs initiative.

“In 2019, Ghana placed 3rd in the Global Food Security Index by the Economic Intelligence Unit (EIU). In the 2020-21 Report by The Permanent Interstate Committee for drought Control in the Sahel (CILSS), Ghana was recognised as the only country in the West African sub-region with stable food security situation, thanks to the successful implementation of the Planting for Food and Jobs programme.”

It said “today, farmers in the country are better off, in terms of their production capacity, purchasing power and economic situation, than they were in 2016. This has been largely due to the implementation of deliberate policies and programmes by the President Nana Akufo-Addo-led administration of the NPP.”

The statement said it is needless for the former President to say that Ghana is likely to face food shortage leading to hunger in the coming year, saying “it is only an act of scare-mongering,” adding that “perhaps, he is being haunted by his long held incompetent title which has led to his obsession for failure.”

“It is however, important to make a distinction between government subsidised and open market fertilisers. Despite the fall in local revenue mobilisation which forced government to reduce the subsidy capacity, general supply of fertiliser on the market has not been disrupted and many more farmers have had easy access to them,” the statement pointed out, adding that “we believe that one of the major objectives of the PFJ programme, which was to introduce farmers to the adoption of fertilisers and improved seeds, has been significantly achieved.”

The statement reiterated the fact that “the country is very safe from any threats of food shortage and that the former President is only engaging in a desperate scare-mongering just for political expediency.”