I was scared when I saw the huge FNB Stadium pitch 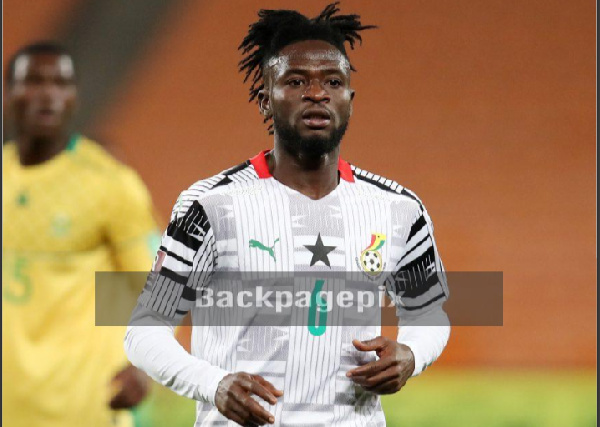 Hearts of Oak defender Fatawu Mohammed was handed his maiden starting role by Coach CK Akonnor in Ghana’s 1-0 loss to South Africa in the 2022 FIFA World Cup qualifier on Monday.

The Hearts of Oak right-back says he was petrified when he stepped foot onto the giant FNB Stadium pitch before kick-off as he had never seen a stadium that big before.

Fatawu Mohammed, 29, played as a replacement for England-based Andy Yiadom who couldn’t travel to South Africa due to Covid-19 restrictions.

He lasted the entire duration of the match as Ghana lost 1-0 with the goal coming late in the game through Maritzburg United striker Bongokuhle Hlongwane.

The FNB Stadium which is moulded like a calabash is also referred to as Soccer City Stadium is undoubtedly one of the biggest Stadiums in Africa with a seating capacity of 94,736

It hosted the opening and the closing match of the 2010 World Cup and it was the venue where Ghana played Uruguay in the quarter-finals where Asamoah Gyan missed that famous penalty.

Speaking in an interview with Kumasi based Angel FM he admitted that he was afraid when he entered the stadium and there could have been a lot of pressure had there been supporters in the stands.

“Honestly, I got a bit scared when I saw the (FNB) stadium because the pitch is very very huge and it wouldn’t have been easy with supporters in the stands. Because the moment you enter the stadium you realise that indeed you are in a stadium.”

“But at long last, we played in an empty stadium so that eased some pressure off; If the supporters had been there the way the pressure was high, it would have been more. But without the supporters, it felt like no man’s land.”

He helped Hearts of Oak to win the Ghana Premier League title and the MTN FA Cuo double in the 2020/2021 season.