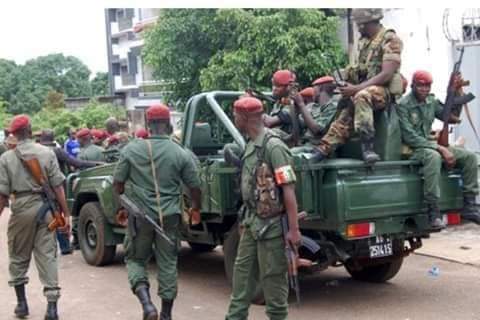 “Infandum, regina, jubes renovare dolorem” (Unspeakable is the task, O queen that you impose. To tear my bosom with reviving woes). -Virgil in Aenid Book II

“Déjà vu” (French) is the uncanny sensation or illusion or feeling that one has lived through the present situation before. Literally, it means “already seen”. In a normal, healthy person, it is linked to precognition, prophecy, clairvoyance or the super-natural. OR “Deja vecu” (already lived): Deja entendu” (already heard); “Deja reve” (already dreamed)… these are all a fleeting eerie sensation, knowing what is going to happen next. Contrast with “Jamais vu” (never seen or speculated).

Alpha Conde had led a chequered political life. Till he was elected in a second round of voting in 2010, he had spent decades in opposition. As the first freely elected President Conde promised to strengthen democracy and fight corruption. Born in 1938 in Boke in Lower Guinea to Burkinabe parents, he left for France at the age of 15, returned to Guinea to contest the 1993 Presidential election. He led the “Rally of the Guinea People (RPG)”. After winning the 2010 election, he won again in 2015, and his 2-term Presidency would have ended in 2020. In March, 2020 he caused a referendum to be held that enabled him to go a third term. The opposition boycotted the referendum. Mamady Boumbouya the Special Forces soldier who usually stood behind Conde with an umbrella led the coup. He had been Conde’s loyal guard for twelve years. A master of political chicanery against every opposition to his regime, he became its victim.

Guinea is a very poor country, despite its immense natural resources, and Conde thought he alone could steer the political affairs of Guinea successfully. The doctor in Shakespeare’s Macbeth caring for Lady Macbeth noted “Unnatural deeds do breed unnatural troubles; infected minds to their pillows will discharge their secrets…”

President Akufo Addo, as President of ECOWAS responded: “ECOWAS notes with great concern the recent political developments which have occurred in Conakry, capital of the Republic of Guinea. ECOWAS condemns unreservedly the attempted coup of Sunday, September 5, 2021. ECOWAS demands respect for the physical safety of the President of the Republic, Professor Alpha Conde and his immediate and unconditional release, as well as that a return to constitutional order on pain of sanctions. ECOWAS reaffirms its objection to any unconditional political change. We ask the Guinean defence and security forces to remain in a constitutional posture, and express our solidarity with the Guinean people and their government…”

Many Ghanaians have reacted to the coup in several ways: but one common trend is the criticism against Alpha Conde for staying beyond his welcome. Dr. Julius Kwaku Kattah noted: “Alpha Conde must be blamed for the coup. But the coup is undemocratic…” Dr. Vladimir Antwi Danso. Dean of the Ghana Armed Forces Command and Staff College noted: “What is happening that the leaders change the Constitution to suit a third term… happened in Senegal, Chad, Niger, Togo, Cote d’Ivoire, Mali…”

In a tweet, a leading figure of the NPP, Gabby Otchere Darko noted: “If there is one thing that you can trust (the two) main political parties in Ghana with, it is that our constitutional provision of a maximum two four – year terms per person will never be disturbed. We know our history and we know our destiny. We believe we will get there…” Coming from a person who has the ear of the President it must be soothing.

What did 83-year old Conde do? – changing the constitutional two-term Presidency to three – this was nothing short of a “constitutional coup”. Then… a President in a pair of trousers and a shirt lying between some soldiers – what more disgrace should one endure?

Our elders have a saying: “Wote sj wo yonko abodwese rehye a, sa nsuo si wo dej ho”) (if you hear a neighbour’s beard is on fire, put water beside yours.) What has been our “history” and what is our “destiny”?

Some of us saw how Ghana, after independence in 1957 following the Westminster and Republican in 1960 dittoing the U.S.A. turned into a one-party state in 1965 (after a Referendum won by over 99%) with Kwame Nkrumah’s CPP in the saddle. The CPP was overthrown in February, 1966. Then Kutu Acheampong overthrew Busia’s regime in January, 1972… Then Rawlings striking in June 1979 and again in December 1981 overthrowing Hilla Limann – the unspeakable, brutal, inhuman attrocities… Then metamorphosing into a civilian President in 1992 running through to 2000 when Kufuor hopped in… till 2008 with Atta-Mills… then Mahama in 2012 till 2016 when Akufo Addo tool over.

Those who have not seen the agonies people go through under military rule are talking as if military rule is the anti-thesis of democracy. You neglect social media now at your own peril. You disregard the youth’s aspiration and it will swallow you.

Our destiny can be nothing less than the Preamble to the 1992 Constitution: “We the people of Ghana, in exercise of our natural and inalienable right to establish a framework of government which shall secure for ourselves and posterity the blessings of liberty, equality of opportunity and prosperity; … of friendship and peace… commitment to freedom Justice, Probity and Accountability… all Powers spring from the sovereign Will of the People… Universal Adult Suffrage; Rule of Law… Human Rights and Freedoms, Unity and Stability for our Nation…”

Alpha Conde has suffered a disgraceful exit; just as Omar al Bashir of Sudan after 30years in power in April, 2019: Abdelaziz Bouteflika of Algeria 2019 after being in power for 20 years; Jacob Zuma of South Africa in February 2018; Robert Mugabe of Zimbabwe forced to resign in 2018 after 37years rule; Blaise Campaore of Mali in 2014 after 27 years in power; Mohammed Morsi of Egypt in July, 2013; what about the maverick Libyan leader Muammar Gaddafi the author of the “Green Book” assassinated after ‘being smoked’ out of a tunnel in Sirte City in October 2011. Sgt Samuel Doe of Liberia who toppled President Tolbert in April, 1980 and was in turn killed by allies of Charles Taylor in 1990.

In 1954, a poem written by Dr. REG Armattoe was posthumously published after the 40year old medical doctor’s death in 1953 resulting from food poisoning. He captioned it: “Deep Down in the Black Man’s Mind”, what make-up made us blacks unique?

Steve Biko argues: “The greatest weapon in the hand of the oppressor is the mind of the oppressed”. But take the oppressor away and put an African there as leader. He crowns himself “King of Kings” (Gaddafi): “His Excellency President for Life, Field Marshall Al Hajj Doctor Idi Amin VC, DSO, MC, Lord of all the Beasts of the Earth and Fishes of the Sea and Conqueror of the British Empire in Africa in General and Uganda in Particular” (Idi Amin).

We in Ghana have passed through hardships before. Some of us may not know; some of us do – that our traditional structures, especially chieftaincy is a bastion of our democracy. “Ghana – Guinea-Mali” was touted by Kwame Nkrumah. It is for soldiers in Ghana to decide whether they will be friends again if they should follow Guinea and Mali with an unhelpful coup d’état.