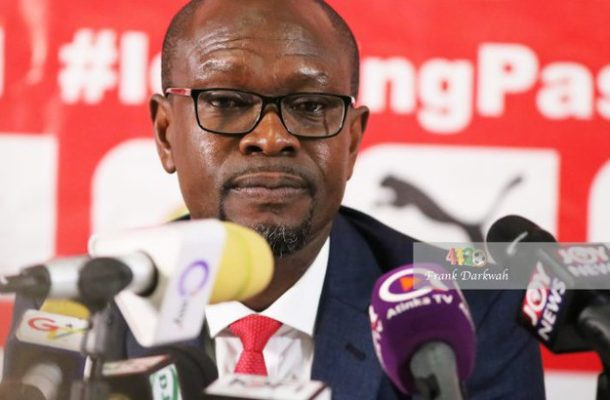 Head coach of the Black Stars C.K Akonnor is set to be sacked on Friday as the Executive Council of the GFA hold a meeting about the team’s performance in the two World Cup qualifiers.

The Executive Council of the Ghana Football Association is set to hold a crunch emergency meeting on Friday 10th September,2021.

Top on the agenda will be the performance of the Black Stars in their two matches in the Qatar 2022 World Cup qualifiers and matters arising.

According to our sources, most of the Executive Council members will pass a vote of no confidence in the former Ghana captain as they believe he has lost the dressing room and he is incapable of inspiring confidence in the team.

The German trained tactician has lost the support of most Ghanaians while the Executive Council is no different but his only hope of retaining his job is when the government who insisted on hiring a local coach step in to save him.

Coach of the Black Stars C.K Akonnor has come under incessant pressure following Ghana’s poor showing in their two matches with a limp display in a 1-0 win over Ethiopia while South Africa also inflicted a 1-0 defeated on Ghana.

Ghana picked three points out of a possible six points after beating Ethiopia and losing to a spirited South African side at the FNB Stadium in Johannesburg.

Since the defeat the competence of Black Stars coach C.K Akonnor has been called into question by many Ghanaians with most people calling for the head of Akonnor.

The future of the former Kotoko, Hearts, AshGold gaffer will be top on the agenda when the Executive Council meet on Friday.

Ghana will face Zimbabwe in a double header on October 6 in Ghana, and on October 10 in Zimbabwe.