Be shareholders of public entities, make them profitable – Joseph Cudjoe to heads of SOEs 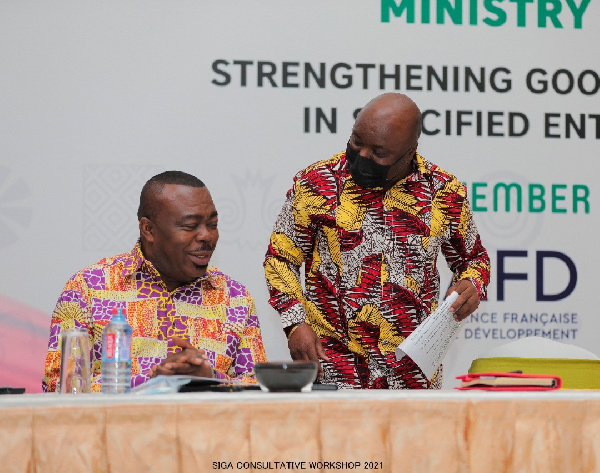 Joseph Cudjoe interaction with Stephen Asamoah Boateng during the workshop

• SOEs have been urged to work hard

The Minister of Public Enterprises, Joseph Cudjoe, has charged the various Chief Executives Officers (CEOs) and Managing Directors (MDs) of state institutions to ensure their organisations are efficient and profitable because they are shareholders.

He explained that it is because the state takes interest in the respective organizations in the country that it continues to invest and support them.

He added that by this, they automatically are shareholders of these entities and should therefore make sure they work at bringing success and profitability to them.

“SOEs can move from accumulating debts and depending on government to inject more capital in the running of them, only if workers and Management alike see themselves as part of the owners of the Institutions they work in,” the minister observed.

According to the minister, it is only a successful and profitable state Institution that can support government’s budget for developmental purposes.

Joseph Cudjoe made these statements in Accra when his ministry, in collaboration with the State Interest and Governance Authority (SIGA), held a stakeholder consultative workshop on the Development of the Draft Code for Corporate Governance.

The event which was supported by Agence Francaise de Developpement (AFD), Expertise France and the World Bank, sought to solicit inputs and recommendations into a draft code of corporate governance which has been put together by SIGA as part of its mandate.

The development of the Code of Corporate Governance is to guide and promote sound corporate governance practices of state entities of which the lack of it is partly to be blamed for the inefficiencies in the public sector, the statement added.

Joseph Cudjoe explained that when SOEs are not performing, the dire impact is that they will be unable to expand to deliver employment, which would help curb the soaring unemployment rates in the country.

Also, he said that if these companies are not able to expand, they become unable to grow to create wealth, thereby not supporting the national development agenda.

For his part, the Director-General of SIGA, Stephen Asamoah Boateng maintained that there is the need to instill discipline, compliance and accountability in the State-Owned Enterprises (SOEs), Joint Venture Companies (JVCs) and State Entities, making necessary the meeting.