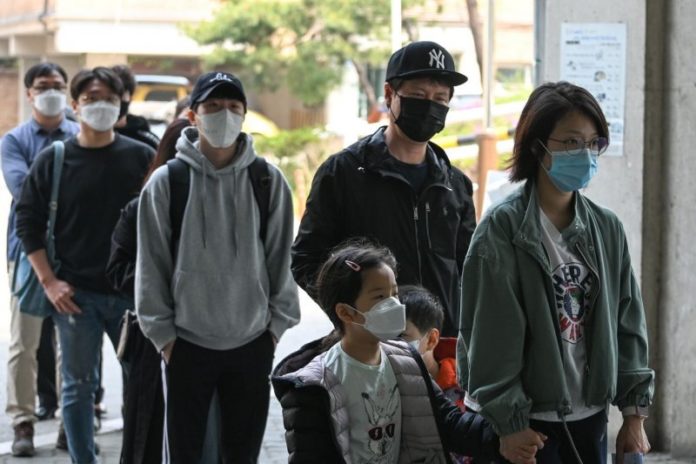 SEOUL, Sept. 8 (UPI) — As the number of vaccinations rise in South Korea, health officials said Wednesday they are looking to replace tough COVID-19 distancing restrictions with a policy molded around living with the virus, starting in November.

Under the strategy, known locally as “With Corona,” measures to contain the spread of the virus will be eased and COVID-19 will be treated as a disease similar to the seasonal flu.

“At the end of October, 70% of all people will be inoculated,” senior health official Son Young-rae said at a press briefing Wednesday. “We expect that from November onward, we will be in a situation where we will review the step-by-step daily transition in earnest.”

The details of the policy change have not been released, but Son and other officials stressed that South Korea will follow a gradual process, rather than a sudden lifting of restrictions as some countries have done.

On Wednesday, the Blue House said that mask-wearing requirements in public will stay in place even once distancing rules are eased.

“‘With Corona’ does not mean taking off masks,” a senior official said in a background briefing with reporters. “Even if the virus prevention system changes, masks should be worn.”

After a slow start in procuring vaccines earlier in the year, South Korea has significantly ramped up its inoculation drive over the past several weeks, hitting a record one-day total of more than 1.36 million doses given on Tuesday.

By Wednesday, 61% of the population had received the first dose and about 37% were fully inoculated, KDCA reported.

The country has been facing a fourth COVID-19 wave driven by the more contagious Delta variant, with daily cases numbering above 1,000 for more than two months. On Wednesday, South Korea recorded 2,050 new cases, its highest total in a week.

Last week, authorities extended distancing measures, which are at the highest level in the government’s four-tier system in the greater Seoul area, until Oct. 3. Under the Level 4 guidelines, bars and restaurants must close at 10 p.m. and private gatherings are limited to four people, or six if at least two members of the group are vaccinated.

While the strict controls have kept the latest outbreak relatively contained, small business owners have complained that they are bearing the brunt of the restrictions.

A group of self-employed workers announced plans to hold drive-through protests in a number of cities in South Korea on Wednesday night, according to news agency Yonhap, in a call for easing COVID-19 restrictions and increasing government compensation.

South Koreans also appear ready to accept a loosening of COVID-19 rules on a faster timeline.

According to a survey by pollster Realmeter on Monday, 58.5% of respondents said that the government should implement the “With Corona” policy in early October, when about half of the population is expected to be fully vaccinated. About a third of respondents disagreed.