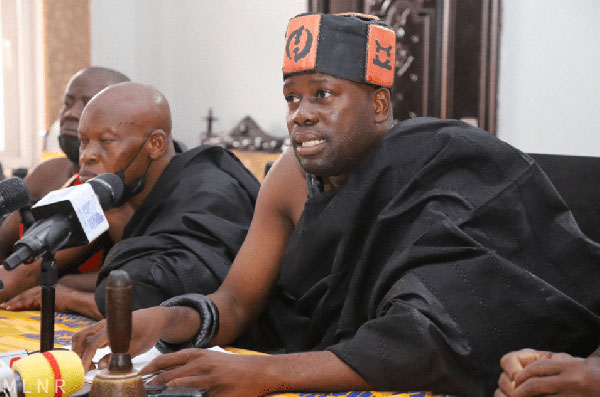 The Acting President of the Denkyira Traditional Council, Nana Agyei Nkyereyeh II, has called for a campus dedicated to mining to deepen government’s resolve to promote sustainable mining in the area and the country at large.

Nana Nkyereyeh II, who doubles as the Adontenhene of Denkyira also called for the setting up of a Minerals Commission office in Dunkwa-on-Offin to help facilitate administrative and operational activities to give true meaning to the town which is noted for mining in the Central Region and the country at large.

The Acting President stated this when the Minister for  Lands and Natural Resources,  Samuel A. Jinapor and his entourage paid a courtesy call on the Council,  at Dunkwa-on-Offin in the Upper Denkyira East Municipality as part of his tour of the region.

“Apart from a campus for mining, we would need a Minerals Commission office here. It will help in the reforms and attend to the needs of our people,” the chief said.

The chief urged the ministry to organise a workshop to educate traditional leaders on the new Land Act to enhance their knowledge and help in effective land administration.

He expressed concern about rising crime rate, especially armed robbery, in the Municipality and appealed to the minister to liaise with his counterpart at the Ministry of the Interior to increase police presence in the area.

On his part, Mr. Jinapor lauded the role of chiefs in government’s efforts to sanitise the small scale mining sector as well as the forestry and land sub-sectors.

He said chiefs were critical agent of change who readily offer support, advice and guidance toward a path of development.

He said government was counting on the support of the chiefs in executing plans and strategies aimed at ridding the country off illegal mining and forest degradation.

“The future of our country is threatened and we can’t allow it to continue. With your support, this government will put in all the efforts to achieve a sustainable and viable mining sector,” Mr. Jinapor maintained.