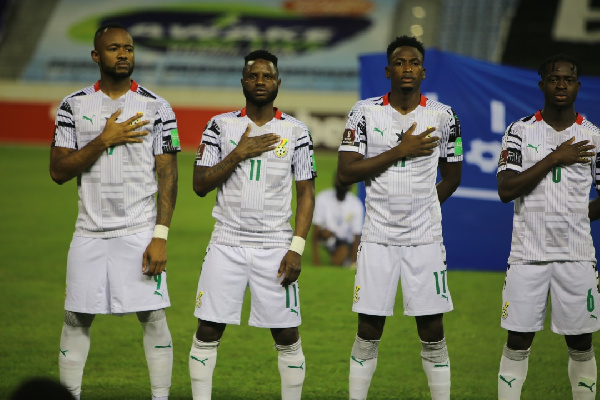 The Ghana Black Stars lost their second game of the 2022 World Cup qualifiers against the Bafana Bafana of South Africa on Monday evening.

Ghana had a single shot on target the entire game with the closest Ghana went near the goalkeeper William’s goal was when Joel Fameyeh was tripped when he was through on goal.

The resulting free kick was fiercely struck by Wakaso Mubarak but the goalkeeper held firm without any trouble.

South Africa were the better side for much of the first half as but struggled to trouble goalkeeper Richard Ofori.

The Orlando Pirates goalkeeper dropped a harmless long range free kick but it went unpunished but getting to the tail end of the first half South Africa should have scored as a cross from the right flank was dropped goalkeeper Richard Ofori but the South African striker Makgopa contrived to miss as he cleared the ball from goal with his left foot.

The first half ended 0-0 as Ghana would count themselves lucky as a Percy Tau header was wrongly flagged offside as the Al Ahly forward appeared to be onside.

Ghana came up a bit better in the second half but it was the Bafana Bafana who made it count as in the 83rd minute as Maritzburg United striker Bongokuhle Hlongwane cushioned a cross into the far corner to open the scores for South Africa.

The Black Stars pressed on for the elusive equalizer as Andre Ayew was taken off with Kwame Opoku coming on while Samuel Owusu also came on but none could do anything to salvage the situation.