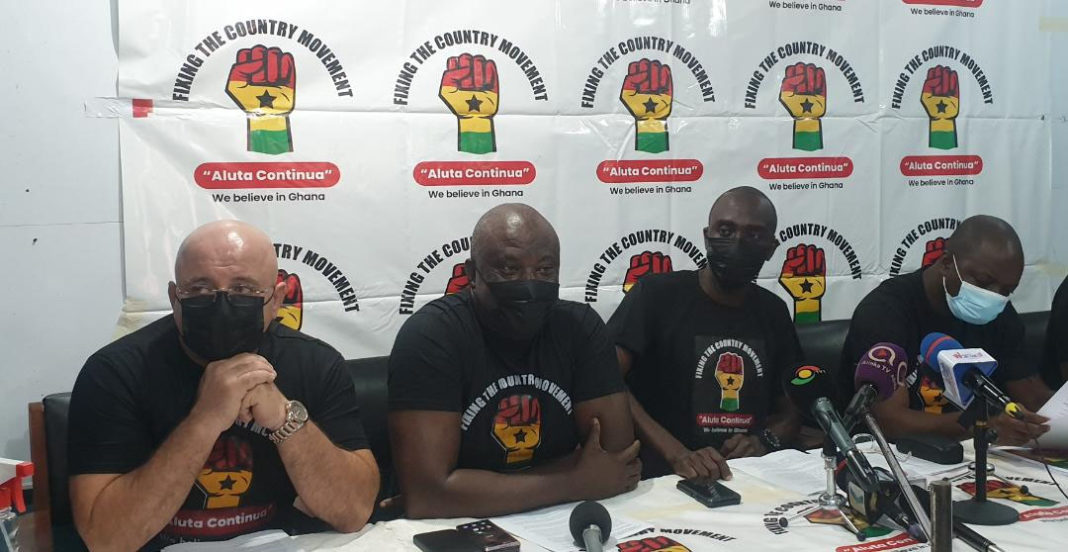 Members of the group during the press briefing in Accra.

The Fixing the Country Movement, has stated that it will petition the Office of the Special Prosecutor and the Attorney General’s Department to begin an inquiry into the Airbus scandal.

According to the group, they believe that former President John Dramani Mahama is neck deep in the Airbus scandal.

Convener of the group, Ernest Kofi Owusu Bempah, addressing the media in Accra, said the aircraft maker (Airbus) has admitted using intermediaries over several years to bribe government officials and airlines executives to win lucrative contracts the world over including Ghana.

He indicated that after the scandal, Airbus SE agreed to pay nearly four billion dollars to resolve foreign bribery and other charges with authorities in the United States, Britain and France.

Mr Bempah noted that the former Special Prosecutor, Martin Amidu concluded in his investigations that former President Mahama is the beneficiary architect of the Airbus deal, of which official UK government records referred to him as Government Official 1.

“The company admitted hiring the brother of a top elected Ghanaian official as its consultant in the sale of the aircraft. Also, Airbus confessed to paying the said consultant through a third party when its Compliance Unit raised red flags about the close relationship between the consultant and the top elected official who was a key decision-maker in the purchase of the military aircraft.

Everyone who is privy to the core details of the series of court documents published by the Department of Justice (DOJ) of the United States and the Serious Fraud Office (SFO) of the United Kingdom cannot allege ignorance of the persons who have brought our nation into this international shame,” he said.

Ladies and gentlemen of the media, what would you say if Osama Bin Laden called someone a “terrorist”, if a prostitute called another woman a “whore”, or if Saddam Hussein called another leader a “dictator?” No doubt you would probably die laughing at the irony. Yet we in Ghana have tolerated the irony of John Mahama to the extent that his utterances have now gone beyond the pale.

The thought of John Mahama pretending to be offering corruption advice to the Akufo-Addo regime sounds farcical.
Indeed, the self-glorification rhetoric of John Mahama has gotten to us so much that we need to get a few pesky facts out of the way.

Ladies and gentlemen of the press, in the past few months after his humiliating defeat in the December 2020 general elections and the abortive challenge at the Supreme Court, John Mahama has resorted to a national “thank-you-tour” with the primary message that President Akufo-Addo and the New Patriotic Party (NPP) Government is corrupt.

This is all to do with his ambition to return to the seat as Head of State, but failing to examine his own tenure in office; the ugly legacy of being the first-ever President to be booted out of office in a popular election mainly as a result of running a government that had no agenda than the siphoning of the public purse.

This is the man who the former Special Prosecutor, Martin Amidu had concluded that he is the beneficiary architect of the stinking Airbus deal, of which official UK government records refer him as Government Official One.

Ladies and gentlemen of the media, as you may be aware, Airbus SE has agreed to pay nearly $4 billion to resolve foreign bribery and other charges with authorities in the United States, Britain and France.

The aircraft maker has admitted using intermediaries over several years to bribe government officials and airline executives in order to win lucrative contracts the world over including in Ghana.

The company admitted hiring the brother of a top elected Ghanaian official as its consultant in the sale of the aircraft. Also, Airbus confessed to paying the said consultant through a third party when its Compliance Unit raised red flags about the close relationship between the consultant and the top elected official who was a key decision-maker in the purchase of the military aircraft.

As a matter of fact, Paragraph 136 of the US Court documents actually described Government official I as having a reputation for bribe-taking.

Ladies and gentlemen, everyone who is privy to the core details of the series of court documents published by the Department of Justice (DOJ) of the United States and the Serious Fraud Office (SFO) of the United Kingdom cannot allege ignorance of the persons who have brought our nation into this international shame.

And since these matters came to light, most Ghanaians have had reasons to believe that government official 1 codenamed in the court’s documents is no other person than Mr John Mahama.

Ladies and gentlemen, is Mahama, the Government Official One in the Airbus scandal also talking about corruption? Is that the same Mahama whose government signed onto a half-baked contract of $1.2 billion for the Ghana Retail Payments Systems Infrastructure?”

Are we talking about the same Mahama who took a bribe (Ford vehicle) from Kanazoe Contractors?

Ladies and gentlemen, Sibton Switch Systems Ltd have just lost an arbitration demand for $478 million from Ghana for revoking that agreement. The Akufo-Addo administration did a far more enhanced project for only $4.5 million. $1.2 billion to $4.5 million.

And more importantly, can Mr Mahama explain the over 200% overpricing of the third rate Circle Interchange, the cosmetic Ridge Hospital, and the so-called Kumasi International Airport that looks more like a landing strip in the remotest part of Somalia to supply yellow corn for refugees?

Indeed, Queiroz Galvao, the Contractors that Mahama used to defraud the state got caught in yet another financial malfeasance in the petrobus scandal in Brazil. That’s how far Mr Mahama took Ghana down the line.

Can John Manhama explain why over GHC 6 million was used to paint portraits of former Heads of State on public buses purchased by the NPP government, which have now been left to rot, at a time that his own party rented those buses to cart unwilling NDC supporters to his uninspiring rallies in the 2016 general elections?

Even well-noted party leaders openly described this as the most obscene visual representation of corruption, calling it “

The Communication Officer of the NDC, Sammy Gyamfi, has found for himself a vocation of presenting imaginary facts and wild guesses that Ghanaians will entrust power in the hands of Mr Mahama in 2024 as per the electoral norms of eight-year expectation.

In effect, Mr Mahama and the NDC have no other motive than, ” it’s our time to come back” to create, loot and share.
The most dehumanizing aspect of corruption under the watch of John Mahama is the purchase of ‘ambulances’ with no medical facility.

Despite that, extra luxury was afforded as gifts to reignite the dwindling careers of showbiz stars with V8 Toyota Vehicles and fat bank accounts to prey on the perceived naivety of the Ghanaian masses. It will not be appropriate to talk of the Cocoa Roads deal of hundreds of millions of US Dollars. The matter is before the courts.

What happened to the Ghana Youth Employment and Entrepreneurial Development Agency (GYEEDA), the then National Youth Employment Programme (NYEP) established by the Party he claims to be corrupt?

GYEEDA under the NDC was only for the milking of the sacred cow of state. What has he said about that?

Look at the banking sector. His friends and family relations overexposed the commercial banks with huge loans, as he supervised a regime of criminal complicity in the violation of banking regulation, putting the life and livelihoods of 4.6 million depositors at the edge of the dark pits of hell.

It can be agreed that the fight against corruption is a major challenge. The speedy trial and imprisonment of the henchmen of frustrated John Mahama will end this obscene irony. Which is why Fixing The Country Movement is in the process of petitioning the Special Prosecutor to resist the Airbus corruption scandal and deal appropriately with John Mahama.

As matter of fact, a host of former world leaders have served time behind bars for corruption committed while they were in power. From Europe to the Middle East to Asia to South America to Africa. The list is endless. Some have been able to avoid prison through appeals and others are on trial, such as South Africa’s past president Jacob Zuma who is facing 16 counts of graft from before his presidency.

In Brazil, former president Luiz Inacio Lula da Silva has been ordered to start a 12-year sentence for corruption.

In Croatia, Ivo Sanader was Prime minister from 2003 to 2009, he was arrested in late 2010 on charges of corruption, embezzlement and abuse of power. Sanader served time in 2011 and again in 2012-2015 when he was released after a court overturned a nine-year sentence and ordered a retrial. Other trials are due.

Portugal’s Jose Socrates who was prime minister between (2005-2011) spent more than nine months in temporary detention before being placed under house arrest in September 2015 over bribery corruption.

Ollanta Humala served as President of Peru from 2011 to 2016, Humala entered prison in July 2017 on a sentence of 18 months of pre-trial detention. This followed charges of accepting illegal campaign donations worth $3 million from Brazilian construction giant Odebrecht.

Bearing in mind the above realities, we are confident that our petition against John Mahama on the Airbus corruption will see the light of day.

Mr Mahama cannot sanitize his corrupt deeds by juxtaposing them with the governing flaws of the Akufo-Addo regime.
Thank you for coming.
(Signed)
Ernest Kofi Owusu Bempah
Convener-Fixing The Country Movement

How a herder became valedictorian at uni graduation