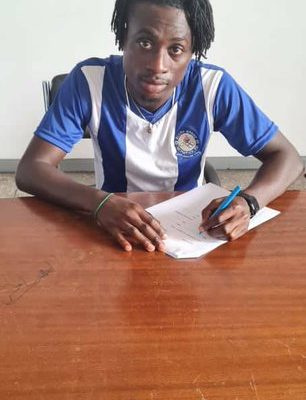 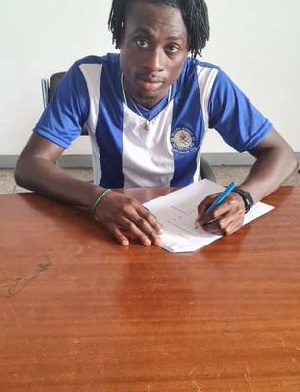 Accra Great Olympics have completed the signing of Ebusua Dwarfs midfielder George Asamoah ahead of the start of the 2021/2022 Ghana Premier League season.

They beat off stiff competition from Accra Hearts of Oak and Kumasi Asante Kotoko who were all interested in the player.

He signed an initial one year deal with the Accra based side with an option for a further year on Friday after agreeing personal terms and passing a medical examination.

Asamoah joined his new club on a free transfer as his contract with Ebusua Dwarfs had ended following their relegation to the lower tier in the just ended season.

He scored three goals in 33 matches for Ebusua Dwarfs in the 2020/2021 season before Dwarfs suffered relegation but was a shinning light in the team.

The midfielder has in the past played for Inter Allies and West African Football Academy SC before joining Ebusua Dwarfs.

He was handed a maiden call up to the Black Stars during the 2021 AFCON qualifier double header match against South Africa and Sao Tome in June.