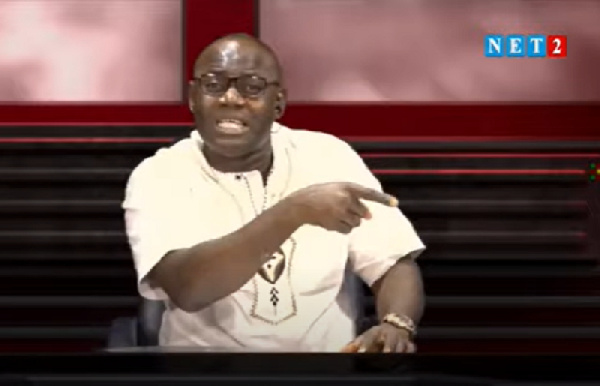 Kwaku Annan is a presenter at NET2 TV, a station owned by Kennedy Agyapong

Kwaku Annan, host of ‘The Seat’ show on Accra-based Net2 TV has tasked the ruling New Patriotic Party, NPP, to accept recent scathing findings from a governance report released by the Center for Democratic Development, CDD-Ghana.

According to Annan, an employee of the station owned by Assin Central Member of Parliament, Kennedy Agyapong; much as the findings are not palatable, they did not come as a surprise to him seeing how bad especially the government and party communication has been in recent times.

“I am not surprised at the findings in the report. It is a case of lack of communication on the part of the government and the New Patriotic Party,” he stated during a commentary on the mid-week edition of the show.

“Take the CDD report and work at it or shut up. You are talking about breaking the eight, before you can consolidate power, it is not to embezzle money and be greedy. Some of you are wicked than death. Hate me if you like, I don’t care.

He made reference to a protest by the NPP’s Director of Elections, Peter Mac Manu, who suggested that the report though welcome was high on propaganda than reflecting the realities on the ground vis-à-vis the work of the Nana Addo Dankwa Akufo-Addo led government.

“I hear the party is challenging the report, I heard Peter Mac Manu, please Mr Mac Manu, you are a good friend, just take the report and work on it,” he added.

Mac Manu told Joy FM in an interview monitored by GhanaWeb that, “The pre-election survey had I think 55 percent of Ghanaians saying that the government was on track in attacking corruption, that’s why I was asking Dr Selormey, in this one, they are saying there are three issues, and then the green was 39 or 30 and ‘same’ was 27.

“So, I asked her what is the meaning of ‘same’? Was it in the ‘same’ that people thought that we are in the same track of attacking corruption? And if you add the yellow to it, then we are way above fifty-something. So, they should have explained to us the meaning of the ash colour which they noted as ‘same’,” Mac Manu said.

A recent research conducted by the Centre for Democratic Development (CDD-Ghana) reveals that most Ghanaians do not believe that President Nana Addo Dankwa Akufo-Addo has the capacity in dealing with corruption menace in the country.

The 2400 adult respondents for the research which was carried out between May 3 to June 3 across the 16 regions of Ghana stated that, they are also less optimistic about the administration’s ability to reduce crime.

Peter Mac Manu described the findings of CDD-Ghana’s research as propaganda being carried out by the government’s detractors.

“If you look at the hullabaloo people are talking about you will be amazed. I mean look at what people are saying, it means that there is so much propaganda than the actual work that is going on. That’s the way that I see it from the result and we must look at actuals than propaganda,” he said.