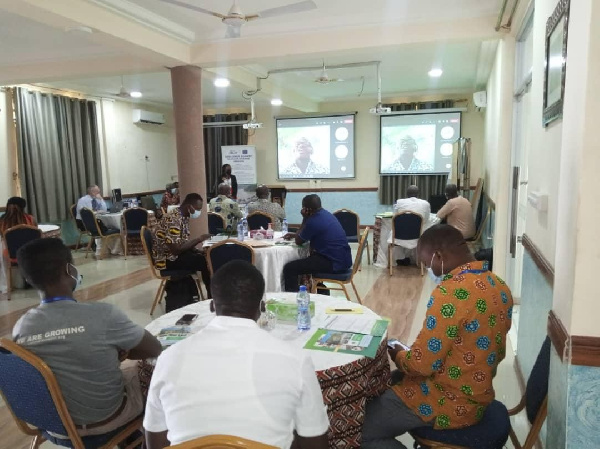 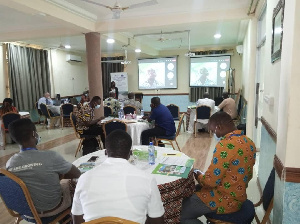 Participants at the workshop

The European Union (EU) Resilience Against Climate Change (EU-REACH) has brought together various stakeholders in the agriculture sector for a two-day validation workshop aimed at brainstorming to develop the consolidated Conservation Agriculture manual.

The manual is intended to form the basis for the development of an accredited course for in-service Agriculture Extension Agents (AEAs) at the Damongo Agricultural College whilst streamlining the same in the regular AEAs training course in all Colleges of Agriculture in Ghana for purposes of sustainability.

Madam Rita Weidinger, the Executive Director for the ComCashew Project, in a virtual keynote address delivered on her behalf by Mr Mohammed Salifu, Head of Production, ComCashew, noted that the development of a consolidated Conservation Agriculture manual for Ghana would be beneficial to all stakeholders, especially in the agriculture sector.

“This will help in the promotion of agriculture at the institutional, communal, and household levels”, she said.

“The REACH project takes a keen interest in the improvement of the livelihoods of poor rural people whose lives depend on Agriculture and most importantly through climate-smart practices that are not detrimental to the environment and promote soil health through improvement in the structure of the soil”, she noted.

Madam Rita Weidinger noted that they were happy to contribute to the government’s effort, which aimed at developing the agriculture sector especially in this time of looming climate issues.

She disclosed that they were developing community land use maps, which would be used in developing Community Action Plan guidelines for the respective communities

The Executive Director of the ComCashew Project noted that this was intended to train AEAs and farmers on best practices using the different agroforestry systems.

She thanked the EU and the German Government for the funding and unwavering support as well as the Ministry of Food and Agriculture and all other stakeholders for their contributions.

Mr Simon Kunyangna, Deputy Project Manager for the REACH Programme appealed to the stakeholders at the workshop to bring their knowledge and expertise to bear in contributing meaningfully to enable them to produce a workable Conservation Agriculture document.

He said climate change was affecting everything, hence, the need for them to prepare themselves to be able to live with the impact, adding that for him, one of the ways to go was Conservation Agriculture and expressed gratitude to the consultants for all the efforts put in so far.

Prof. Joseph Adjei Kwarteng, a former Dean of the School of Agriculture at the University of Cape Coast (UCC), and also one of the Consultants, noted that the inputs of stakeholders were so important in developing the final document.

He, therefore, urged them to critically look at the content in the Conservation Agriculture manual and make their expert inputs that would be acceptable by all stakeholders.

Participants of the two-day validation workshop were drawn from the Ministry of Agriculture, the Non-Governmental Organisations (NGOs), and the Colleges of Agriculture among others.