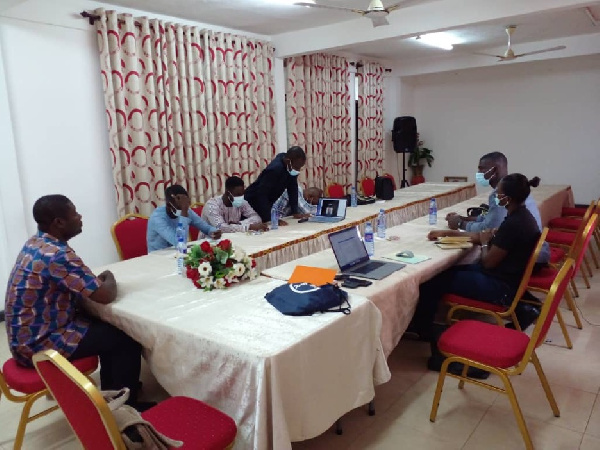 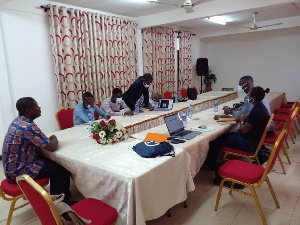 Participants at the stakeholders meeting

Dr. Ampadu – Ameyaw who works with the Science and Technology Policy Research Institute of the Council for Scientific and Industrial Research (CSIR) says the variety will offer the country a lot of benefits when it is eventually approved for the benefit of farmers and consumers.

“In a lot of places, being able to buy fish or meat is a challenge… More beans will help ensure more proteins for the people,” he observed.

“If it is well managed and well farmed, it could help a lot of people move away from poverty,” he added.

Dr. Ampadu – Ameyaw who is also Country Coordinator of the Open Forum on Agricultural Biotechnology (OFAB), was speaking at a stakeholders meeting in Accra organized by Alliance for Science Ghana (AfS Ghana) on ongoing efforts by the CSIR to introduce the improved GM cowpea varieties in the country.

Scientists at the Savannah Agricultural Research Institute (SARI) of the CSIR have completed trials on the pest-resistant cowpea (beans) and will soon apply for environmental/commercial release of the GM variety. The GM crop is expected to help farmers dramatically reduce their use of pesticides on cowpea farms, while also enjoying better quality yields of this important staple food. Cowpea popularly called beans is a popular delicacy which people consume in their waakye, gorbe (rice and beans), among several diets.

A destructive pest known as maruca pod borer has been responsible for highly low yields of the protein rich cowpea crop, forcing farmers to spray their fields with pesticides for up to 8 times in the 12-week life cycle of the crop. But the GM cowpea resists the pest which can cause destruction to about 80% of all cowpeas on farmers’ fields. They are particularly devastating because they damage not only the flowers and the buds, but also destroy the pods, resulting in grain and yield loss.

The pod borer resistant cowpea (PBR cowpea) as it is called, helped farmers cut down pesticide use on their farms by up to 80% during field trials supervised by scientists from SARI. The resistance is the result of the introduction of a gene from a naturally occurring bacteria Bacillus thuringiensis that has the capacity to control the pest. The scientists are confident the variety will help ensure more residents in rural areas have access to more protein-rich beans to help avoid cases of kwashiorkor and other protein deficiency diseases in children across the country.

Executive member of Alliance for Science Ghana Joseph Opoku Gakpo called for increased education on the varieties to ensure members of the public better understand what it’s all about and the objective for its development.

He disclosed the National Biosafety Authority will invite public comments from the public when it receives a request from the CSIR scientists for its approval and urged members of the public to take interest and contribute to the discussions.

“These decisions will be made based on whatever the available scientific data is. But the National Biosafety Authority is obliged by law to invite public opinion and factor that in the decision it makes. So, let no one sit on the fence. Especially the scientific community, Make your voices heard, This country is for all of us and we all have every right to be part of the key decisions that will eventually shape our agricultural sector,” Mr. Gakpo told the meeting.

Collins Oppong, an agricultural officer with the Directorate of Agricultural Extension Services of the Ministry of Food and Agriculture urged the scientists working on the variety to avail themselves to the public for proper education on the improved variety.