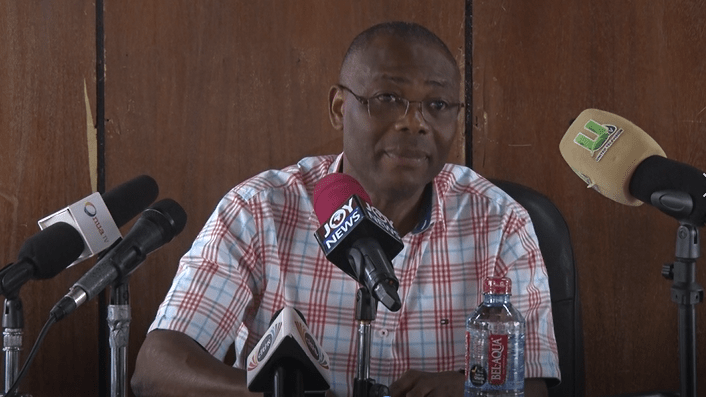 The Ghana Music Rights Organisation (GHAMRO) has announced that it has entered into an agreement with some companies to provide digital monitoring systems to help in tracking how songs by Ghanaian musicians are used on radio, television, and digital platforms.

Speaking at a press conference on August 31, 2021, the Chief Executive Officer of GHAMRO, Abraham Adjatey said the long wait for getting a digital means of monitoring music, is over.

“GHAMRO has committed to an agreement with Global Music Monitoring to monitor music throughout the country for us, with the assistance of Ghud Music. Because as much as we are going to have some foreign-based company working with us, we should also be able to develop our local and internal capacity. So we are going to continue working with Ghud Music to develop a proper template as a developing system,” he said.

He added that they are working with Indie Consortium to develop a collection system for the organisation.

He said they have contracted CAPASSO, a copyright society in South Africa versed in Digital Rights Licensing, to monitor online digital platforms for Ghanaian songs. According to him, after the exercise, they have been able to make $49,000 for GHAMRO right owners.

Abraham also noted that Global Music Monitoring has for the past five months been doing an auto-pilot of broadcast monitoring of Ghanaian music.

He said after monitoring 300 stations in Ghana over the period, they are convinced and ready to work with them. This means that the organisation will now be able to get a more scientific means of calculating musician’s royalties.

This scientific data will help in the equitable distribution of royalties among musicians who have signed their works with GHAMRO.

He further stated that GHAMRO had to rely on foreign companies to assist in the monitoring because most of the Ghanaian-based companies, did not have the full capacity to do so.

Abraham Adjatey was emphatic on the need for musicians to sign split sheets of contributors to their works.

He said that provides metadata on who should receive payment of royalties on a particular musical work.

In tandem with that, he said GHAMRO will provide copies of the split sheets to the recording studios, so musicians commit to making sure they enter the right details.

He, therefore, urged lyricists, composers, arrangers, publishers to sign their right with GHAMRO to enjoy the benefits that come with it.

Global Music Monitoring (GMM) was founded in 2016 as an in-house developed tool to help DJs detect any instances of plagiarism of audio content uploaded to the web.

Over time, the GMM service and technology gradually evolved based on market needs and specific customers’ projects and requirements.

Since 2017, GMM, based in Dublin has been operating as the technological partner to a number of radio and TV monitoring projects worldwide as well as the supplier of deeply customized monitoring turnkey solutions for businesses and B2G.

GHAMRO executives have been heavily criticised over the years for paying paltry sums of money to musicians as royalties.

Some musicians have complained that they take as low as GHS200.

To most of their critics, they have not been proactive enough to work towards making the collection and distribution of royalties more effective.

Recently, Ghanaian dancehall artiste, Livingstone Etse Satekla, known in showbiz as Stonebwoy re-ignited the discussion when he mentioned to Ghana’s High Commissioner to the United Kingdom, Papa Owusu-Ankomah that since he started music, the only amount of money he has received as royalties from GHAMRO is GHS2,000.

In July, 85-year-old legendary Ghanaian musician, Ebo Taylor said he was not impressed with the amount of money he got from Ghana as royalties as compared to what he takes from abroad.

“It is not enough, it is not any good money to rely on. I get $20 million from the diaspora, 20 million dollars or 50 million pounds. I don’t get much from Ghana because it’s just one country but abroad there’s Italy, Spain Norway, Sweden, Denmark,” he said.

A group called Alliance for Change in Ghana Music has for the past few years been critical of GHAMRO, contemplating ways of possibly getting another collection management organisation for Ghanaian musicians.