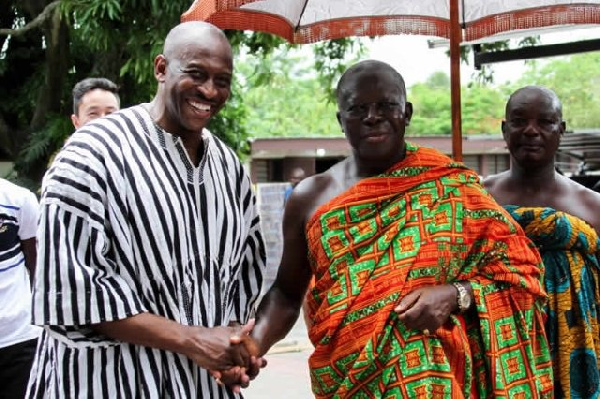 Herbert Mensah in a handshake with Otumfuo

Former Asante Kotoko Chairman, Herbert Mensah, has sent a heart-warming message to the club as they celebrate their 86th anniversary.

Mr. Mensah, an astute sports administrator, was Kotoko’s Chairman from 1999 to 2003 where he transformed the team into a viable and winsome side before joining regional rivals AshantiGold Sporting Club.

The current Ghana Rugby Football Union President is regarded as one of the best football administrators to ever head Asante Kotoko despite not being able to win any African trophy for the team under his regime.

And with the club celebrating its 86th anniversary, Herbert Mensah has wished the team a happy birthday with a touching message, urging the board, management, playing body, and the supporters to come together and make Kotoko great again.

Read his message below:

Looking back into history, the club’s great achievement of winning the African Cup under the chairmanship of the late great Acheampong, whom he I, always left my chairmanship seat for due to so much respect he had for him, has been one of my joyful moments in the history of Asante Kotoko SC. My respect for Simms Mensah for the constant investments into the team, constant need for change to do better, etc which paved the way for the 1983 greatness of Bawuah and some good old players like the great captain Godwin Ablodey, Robert Mensah the greatest goalkeeper Africa has ever seen, Full backs like Dan Oppong, James Kwasi Appiah former Black Stars Coach, some center backs like Addai kyenkyenhene, my first encounter with the great player Dogo Moro et al at Kotoko training grounds with the famous Sports Journalist Kwabena Yeboah, and the structures of the team of that still make Asante Kotoko, the greatest of all time.

The honor of working with the great Sunday Ibrahim during my transition period at Asante Kotoko made me realize the qualities of humility and strength Asante Kotoko had as a team.

The lives of the magician and golden boy Razak, the fearsome Baba Yara, and Osei Kofi on the right and left wings of the pitch respectively made the opponents feel nothing more but terror in the defence over history with a time of this great club Asante Kotoko.

Though the team has had management members come in and out to do their little bit to help grow the club as well as some good old players and members who have long departed to eternity, they will never be forgotten and May their souls rest in blessed peace forever.

At 86 years we are still traditional and you can not take away the achievements and greatness of the prestigious club Asante Kotoko.

Happy birthday to Asante Kotoko and wish them more greatness ahead.”