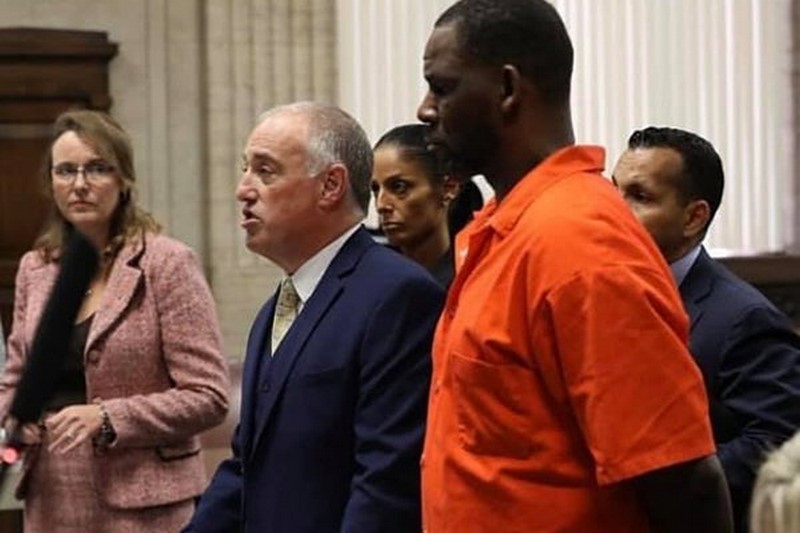 R. Kelly‘s sex trafficking trial entered its eighth day on Monday, with a male accuser testifying that the star promised him fame in exchange for sex.

The man, who testified under the pseudonym Louis, said he was a 17-year-old when Mr Kelly asked him what he “was willing to do for music”.

He then described how the singer crawled towards him and performed a sex act, even though “I wasn’t into it”.

Mr Kelly, 54, denies all the charges against him.

These include a single count of racketeering – which paints him as the kingpin of a criminal enterprise whose explicit purpose was “to prey upon young women and teenagers” for sexual purposes – and eight counts of violating an interstate anti-sex trafficking law known as the Mann Act.

The singer, whose full name is Robert Kelly, is not charged with rape or assault, but prosecutors are allowed to present evidence of any potential crimes related to the racketeering charge, regardless of when they occurred.

On Monday, the jury heard from two accusers, both of whom said they were underage when they met Mr Kelly.

Louis said he first encountered Mr Kelly in 2006 when he was a 17-year-old working the night shift at a McDonald’s in Chicago.

He told the court that Mr Kelly slipped him his phone number, and invited him to his house, saying he could perform in his recording studio and receive some tips on the music business.

One on such occasion, the star asked Louis if he had ever “had any fantasies” involving men, then allegedly “crawled down on his knees and proceeded to give me oral sex”.

Afterward, “he told me to keep between him and me”, adding, “we family now, we brothers”, Louis alleged.

He said Mr Kelly asked him to call him “daddy” – echoing the testimony of several female accusers – and would routinely film their sexual encounters.

He told the court he kept seeing Mr Kelly because he “really wanted to make it” in the music industry, and sometimes took friends to the singer’s parties.

One of them, a 16-year-old boy, also had sexual encounters with Mr Kelly, according to court documents. On one occasion, the singer directed the two to “touch each other” sexually, Louis testified, but they refused.

Louis, who is now 32, was testifying as part of a co-operation agreement he entered into in February 2021, under which he hopes to avoid jail time of up to 15 years.

He had previously pleaded guilty to offering money to a potential witness against Mr Kelly in an attempt to stop her co-operating with prosecutors.

Louis said he was worried the unnamed witness possessed sex tapes of him and Mr Kelly but maintained the star had no knowledge of the bribery attempt.

The court also heard from a female accuser on Monday, who testified that Kelly sexually assaulted her at the age of 17, following a concert in Miami in 1994.

The woman, who testified under the name Addie, said she and her friend had been approached by two men “who looked like bouncers” and invited backstage after the show.

Once there, she alleged Mr Kelly cleared the room, grabbed her wrists, pulled down her shorts, and raped her.

“At this point, I was in complete shock,” she told the court. “I just went blank.”

Afterward, her friend wanted to contact the police but Addie feared she would be blacklisted by the entertainment industry if she came forward.

“I didn’t even know if they would believe me,” she said. “I didn’t want to be victim-shamed.”

On cross-examination, Mr Kelly’s lawyers asked why the woman, who is now 44, had waited more than two decades to contact law enforcement.

“Because I didn’t want to feel more shame and trauma,” she said, before adding that she no longer did.

“I’m an adult now,” she testified, holding back tears. “I’m no longer a little girl.”

Mr Kelly has pleaded not guilty and repeatedly denied accusations that he preyed on victims during a 30-year career. His lawyers have portrayed his accusers as groupies out for revenge after their relationships with the R&B singer faded.

If convicted, the star – whose hits include I Believe I Can Fly and Ignition (Remix) – faces between 10 years and life in prison.