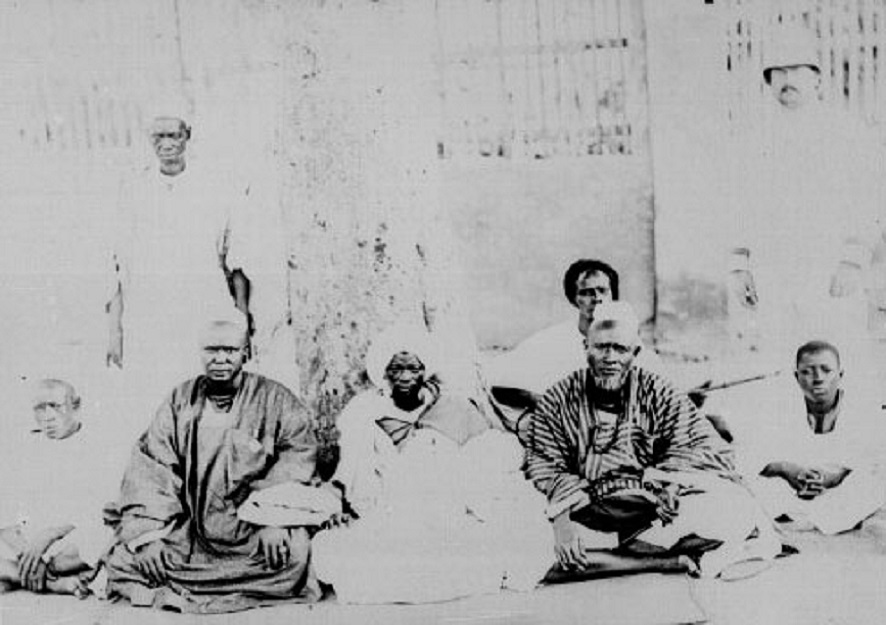 Diobé, ruler of Soninke colonial era town of Bakel, with his advisors. Image via Wiki

Around 1068 in the pre-colonial era, Ghana was clearly the largest, wealthiest and most powerful state in West Africa if not in Africa. There were two important reasons for this success. First, the discovery of large quantities of gold made it possible for the Ghana Empire to trade with North African merchants and other traders of ‘white’ origin who provided horses, salt and iron implements in exchange for gold.

Second, the leadership, commercial and military supremacy provided by the Soninke – the indigenous, ruling people in ancient Ghana — created a state which became the envy of all in Africa. This empire dominated West Africa for several years with its military and economy. So who are the Soninke?

Known by a variety of names, including Sarakole, Diankanke, and Wangarawa, the Soninke are Mande-speaking people of West Africa found in eastern Senegal and its capital Dakar, northwestern Mali and Fouta Djallon in Guinea, The Gambia and southern Mauritania. They speak a Mande language of the Niger-Congo family and were one of the early ethnic groups from sub-Saharan West Africa to convert to Islam in about the 10th century.

They would found the first West African empire, Ghana, which they themselves call Wagadu, from the 6th to the 12th centuries AD. It should be noted that the Ghana Empire was not located in present-day Ghana. The capital of the empire was Kumbi Saleh.

“Long distance trade contributed to the development of an ethos of migration among the Soninke, arguably making them the most traveled people of the whole continent,” one study noted, adding that as the Soninke embraced Islam, some Soninke clans became clerics and proselytizers and followed the trade routes. Some would even become advisers to kings and chiefs.

When the Ghana Empire was destroyed after the invasions of Muslim conquerors in the 10th century, the Soninke diaspora and trade networks were found all over West Africa including in Mali, Guinea-Bissau, Gambia, Senegal, Mauritania, Côte d’Ivoire, Burkina Faso and the modern-day Republic of Ghana.

As Face2Face Africa earlier reported, the Ghana Empire declined and fell for three fundamental reasons. One, the monopoly which the empire enjoyed with its control of the trade in gold weakened suddenly when the Sanhaja Berbers joined the fray. This led to serious unhealthy competition.

Two, the sporadic attacks on the empire by its enemies, notably the Almoravids and the Muslim State of Tekrur, the Susus and the Mandingos tremendously affected the defense capacity of the empire and later weakened its economy as a result of unceasing bombardments. These attacks occurred from 1062 to 1076 when Tunkamenin was in power. The third reason, however, was an internal crisis. The ambition of local lords and sub-kings to achieve political independence and financial autonomy disrupted the administrative and political system of the empire such that the internal insurrections made it easier for the external campaign.

When the Soninke people dispersed following the fall of the empire, some later joined the Akan people to establish modern Ghana. Currently, Soninke, whose contemporary population is estimated to be over 2 million, can be found on all continents.

Mande groups such as the Malinke and Bambara may be descendants of the Soninke. As such, the cultural practices of the Soninke people including marriage and circumcision are similar to the Mande people and those of the Imraguen of Mauritania.

Cousin marriage is common among the Soninke as it “helps to keep the money in the family”, according to Saskia Brand, a professor of psychology and educational sciences. Couples are mostly engaged in a mosque after their families agree. The marriage, called futtu, comes with a marriage contract that mentions the fact the man must pay the woman’s family a bridewealth dower (nakhafa) for their food and other needs. He must make this payment each month after the engagement.

Apart from practicing circumcision called birou for boys, the Soninke sometimes carry out female genital mutilation (FGM) for religious reasons and as a ritual of social acceptance. Traditionally engaged in trade and agriculture, they have a special food they take for lunch — demba tere and takhaya — both containing rice and peanuts. Those found near Bakel on the Sénégal River have their chief crop being millet.