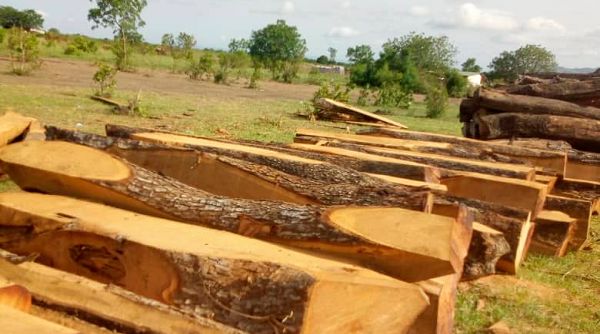 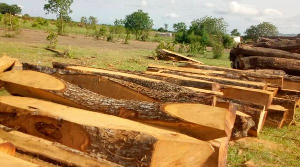 13 containers of rosewood have been impounded by the Ministry of Lands and Natural Resources at the Tema Port.

This was done in collaboration with the National Security and Customs Division of the Ghana Revenue Authority (GRA).

The operation, according to a Dailyguidenetwork report, was carried out on Friday, August 27, 2021 during which the contents of 6 of these containers were confirmed to be rosewood.

Deputy Lands and Natural Resources Minister in charge of Forestry, Benito Owusu-Bio who led the team indicated at a press conference that the team got hint that rosewoods were being imported from Nigeria into Ghana.

They however decided against opening the containers in the absence of the owners.

According to him, investigations following the tip off revealed that the containers were about 13 in number contrary to the initial 5 figure that was stated.

He also revealed that the case will be handed over to the National Investigations Bureau for further investigations and subsequent arrests.

The Deputy Minister also reiterated government’s resolve to clamp down on the importation and exportation of rosewoods in the country.

Giving an update of previous incidents where rosewood has been impounded, Mr. Owusu-Bio said,

“The government under the auspices of the Samuel Abu Jinapor is cracking down on illegal rosewood trade”, he said.

“In June this year, seven trucks ferrying rosewood were impounded by a highly efficient and motivated taskforce”, he added.

Two were seized at the Savannah Region while the other five were arrested at the Tema Port.