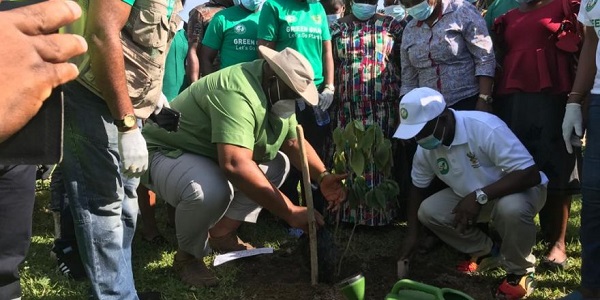 In support of the Green Ghana project spearheaded by the Ministry of Lands and Natural Resources, the Church of Jesus Christ of Latter-Day Saints (LDS) has rallied its congregants countrywide to plant trees.

The nationwide tree planting exercise was marked as part of the Church’s programme calendar known as “All Africa Service Project”, which is held annually in August.

It was instituted in 2006 to offer congregants the opportunity to serve communities in various forms but this year’s celebration had a common goal to plant trees, nurse them and grow them to maturity as a way of contributing to environmental preservation.

Reporting from Akim Asene and Akim Oda, in the Eastern Region, the members of the church together with Assembly members, media, and officials from the Department of Parks and Gardens, planted a number of tree seedlings.

In an interview with the Ghana News Agency, Mr Kwadwo Okoh, Chief Technical Assistant Officer, Department of Parks and Gardens, Birim Central Municipality, said the church was provided with different species of seedlings including Casia.

He said the department and the church would ensure the seedlings were well nurtured and urged individuals, institutions, and clubs, to participate in the Green Ghana Project.

He explained that trees withstood wind speed while contributing to the amelioration of climate change effects.

Both Mr William Asare and Mr Stephen Agodzi, Communicators for the Church at Akim Oda Ward one and Ward two respectively recommended that planting of fruit trees should also be encouraged and its consumption promoted for good health.