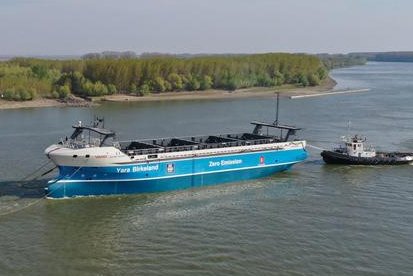 Aug. 25 (UPI) — The Yara Birkeland, the first zero-emissions, crewless cargo ship, built by Norwegian company Yara International, is set to make its first journey by the end of the year.

The ship will be monitored from three onshore data control centers when it makes its voyage between two Norwegian towns, CNN reported Wednesday.

The fully electric container ship is designed to reduce emissions in the shipping industry, which currently accounts for between 2.5% and 3% of global greenhouse gas emissions. The crewless cargo ship was conceptualized in 2017 and can carry 103 containers at speeds up to 13 knots.

The COVID-19 pandemic and logistical challenges delayed the launch of the Yara Birkeland, which originally was scheduled for 2020.

“[I]nnovation projects come with uncertainties and challenges,” Yara International said in a news release in November. “In particular, the autonomous logistics on land that have proven to be a challenge for the project.

“The construction of the ship has been done according to plan with slight delays, including the fitting of the battery, control and navigation systems, For the autonomous logistics on land the project team continues to look for simplified solutions to this.”

The crewless ship follows an autonomous ferry launched in Finland in 2018.