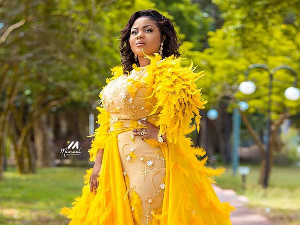 • She says some men carelessly chew breasts instead of fondling them

She said most men are fond of chewing a woman’s breasts as though they are chewing sugarcane instead of just playing with it.

According to Empress Gifty, women in most cases are uncomfortable with the act but do not know how to relay such a plight to their partners.

In a video that has gone viral on the internet, the gospel musician who seems to have assumed the role of a ‘sex therapist’ said the unbearable pain women mostly feel when their breasts are been chewed cannot be explained.

“To the men who chew breasts like they are chewing sugarcane, they have sent me to tell you that you’re hurting them. Take your time and suck the breasts, be patient with the body of women. Women are weaker vessels so handle our bodies with care. Treat it with care,” she stated.

She however advised wives to learn how to initiate sex and know the right plugs to pull to get their husbands in the mood.

“Sometimes husbands too may be going through some challenges and stress. Due to this, the man might not also be in the mood whatsoever. As a woman, it is your duty to encourage the man. Do him the honours and tell him some sweet words, turn him on. Sex is a mental issue. It has to do with the mind. Know the right places to touch and get him in the mood,” she explained.

Following her comments, some social media users have wondered why a gospel singer would publicly address issues relating to sex.