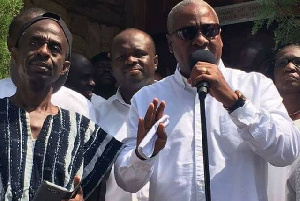 The General Secretary of the National Democratic Congress (NDC) Johnson Asiedu Nketia has said that the party accepted the verdict of the election petition hearing at the Supreme Court not because they thought justice had been done.

Rather, he said, it was to save the democracy of the country.

Dissatisfied with the results of last year’s polls, the NDC’s presidential candidate John Dramani Mahama filed a petition at the apex court to order a rerun of the presidential elections.

Mr Mahama rejected the results announced by the chair of the Electoral Commission Jean Mensa that declared the candidate of the New Patriotic Party (NPP) Nana Addo Dankwa Akufo-Addo winner.

Mr Mahama believed that no candidate polled the number of votes to win the presidential elections.

After four months of hearing the petition, the seven-member panel of the Supreme Court by a unanimous decision dismissed the petition on the grounds that it was without merit.

Mr Mahama accepted the court’s pronouncement although he disagreed.

Speaking at a press conference in Accra on Tuesday August 24, Mr Asiedu Nketia said “It is trite knowledge that all is not well with our elections in Ghana.

“It all begun as far back as in 1992, some have got solutions along the way from each passing elections since 1992.

“We thought we were making progress because each election represented an improvement on the previous elections until 2020 came and you will bear with me that 2020 elections has been one of the worse elections we have had in the 4th republic.

“We did our part as a country to resolve some of the problems. We made it known to the whole world that we are accepting to work with the outcomes of the court processes not because we think there has been justice.

“But we think we have to save the democracy and improve upon what we have.”