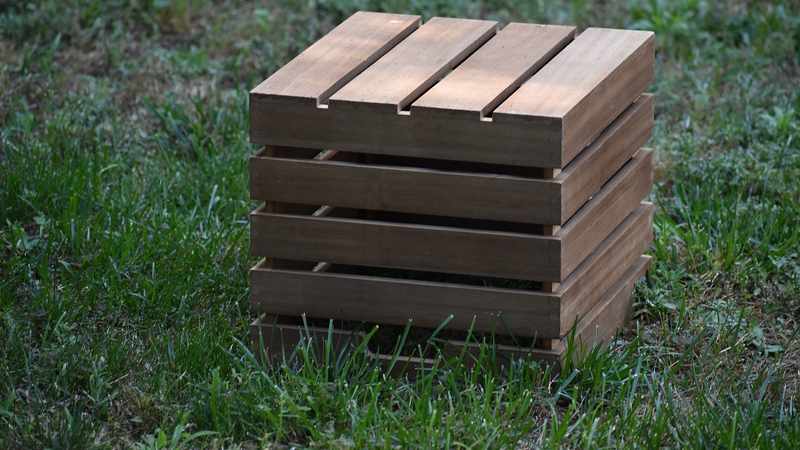 Step by step, participants walk precariously up a pyramid of milk crates, inching closer to greatness or, more likely, a trip to the emergency room that will be viewed by millions.

When they fall – and they usually do – throngs of people who’ve helped make the social-media spectacle known as the Milk Crate Challenge into the latest viral phenomenon proceed to sing a chorus of “oh!” and “ah!” as the pyramid collapses and a person’s body painfully lands on a milk crate or the ground.

This was the case of one Atlanta-area man over the weekend, who flashed two thumbs-up as he was halfway through his conquest. One second later, he lost control and his body flew forward, crashing headfirst into the grass. He did get up, still flashing the double thumbs-up to the crowd of camera-phones that couldn’t resist filming the latest failure.

The Milk Crate Challenge – which has people walking up and down stacks of empty milk crates in the shape of a pyramid – has gone viral in recent days, with the often catastrophic results shared by millions across social media and some proclaiming it to be “the funniest challenge since the Ice Bucket Challenge.”

“It’s the biggest thing that’s going on in every neighborhood right now,” said Derek, a 38-year-old social media personality based in Long Island, N.Y., better known as @itsbizkit who preferred not to give his last name because of privacy reasons. “You go to any park or public place right now and you’ll see crates there.”

But many have noted that the Milk Crate Challenge has taken up where the Tide Pod Challenge left off as a viral meme that’s become a public health hazard largely fueled by social media. Some doctors are also warning that the injuries from the challenge are putting more stress on hospitals at a time when emergency rooms nationwide are overwhelmed because of the surge in coronavirus infections.

“Everyone needs to do their part in supporting first responders and health-care providers, and that involves not partaking in challenges like this one that are putting additional strain on the system,” Shawn Anthony, an orthopedic surgeon specializing in sports medicine at Mount Sinai Hospital in New York, told The Washington Post.

While the exact number of injuries and hospital visits related to the Milk Crate Challenge is unclear, Anthony said that colleagues from across the country are reporting on online forums that they’ve seen challenge participants for a variety of injuries, including shoulder dislocations and rotator-cuff tears, ACL and meniscus tears, broken wrists and even spinal cord injuries. When Anthony first saw what he described as the “dangerous Internet challenge,” he was reminded of the injuries he routinely sees when people fall off ladders or are hurt in high-speed skiing accidents – with the difference being that the Milk Crate Challenge involved what he called “elective injuries.”

“It’s perhaps even worse than falling from a ladder,” he said. “It’s very difficult to brace yourself from the falls I’ve seen in these videos. They’re putting their joints at an even higher risk for injury.”

Henry Schuitema, chief of emergency medicine at Jefferson Health in New Jersey, said his hospital recently saw one patient who suffered several fractured ribs after participating in the challenge. Schuitema told The Post that TikTok and other social media platforms were to blame for spreading and promoting the Milk Crate Challenge.

“So many of these injuries we’re seeing are preventable just by being intelligent,” Schuitema said. “If you catch a corner of one of those crates, it’s going to be problematic. It looks like something funny, but real people are getting real injuries.”

A TikTok spokesperson said in a statement to The Post that the platform “prohibits content that promotes or glorifies dangerous acts.”

“We remove videos and redirect searches to our Community Guidelines to discourage such content,” the spokesperson said. “We encourage everyone to exercise caution in their behavior whether online or off.”

The origin of the Milk Crate Challenge is unclear, but the website Know Your Meme has pointed to a June 2011 video titled, “Guy falls off 6 Milk Crates,” as an inspiration for the latest challenge.

On Aug. 1, a Chicago resident posted videos to Facebook of two men walking on milk crates that were allegedly the first videos of what would later be known as the Milk Crate Challenge. About two weeks later, the videos were shared by two people in Columbus, Ohio, and went viral after a video of people failing the challenge was posted to TikTok, where it received more than 5 million views in one day.

Since then, the Milk Crate Challenge has unfolded in communities nationwide. Videos shared to social media and viewed by millions have helped the challenge trend over the last week across multiple platforms. Derek, the person behind @itsbizkit, told The Post he’s seen his Twitter following increase by 30,000 in the week since he started posting Milk Crate Challenge videos. One of the videos, which featured a man fall backward squarely on a column of crates, has been viewed more than 4 million times as of Tuesday.

But as the challenge spread over the last week, concern from doctors and observers has also increased. George Gantsoudes, a pediatric orthopedic surgeon in Virginia, posted an example on Twitter of a challenge-gone-wrong with a warning to any thinking that surgery wasn’t a possibility following a fall.

“The [orthopedic] surgeries required to fix problems caused by this may fall under the umbrella of ‘elective surgeries,’ ” he tweeted. “Might not want to tempt the trauma gods if you live south of the Mason-Dixon.”

Some have noted that the people they’ve seen falling in horrible fashion “do not have the insurance to be doing these milk crate challenges.” WSB-TV reported that an Atlanta-area medical worker Sunday saw at least two people with broken or fractured bones after falling off milk crates. In Akron, Ohio, there was a $500 prize for anyone who could make it across the milk crates without falling.

One observer in New York tweeted how young people in her neighborhood were at a bodega “trying to negotiate buying crates” so they could do the challenge on concrete. She later shared a photo of an ambulance with the caption, “Crate challenge over.”

Some celebrities and media personalities have also questioned the latest viral challenge. ESPN commentator Stephen A. Smith joked Monday that the challenge videos posted to social media posed a greater public health threat than the coronavirus.

“I challenge anybody – anybody on Earth – to find people dumber than these people,” exclaimed Smith, who was a guest host on “Jimmy Kimmel Live!” “What is wrong with these people? First, you drink the milk from the crates to get strong bones – then you fall off the crates to break them?!”

Rapper Snoop Dogg was initially critical of how the challenge, which mostly featured Black people falling from the crates and injuring themselves, had gone viral. “Why we love to see each other fall?” he wrote on Instagram with a face-palm emoji. “We got 2 to do better.”

But Snoop Dogg, who has been celebrated for his commentary during sporting events, later joked with Smith about one video in which a person is shown landing chest-first onto a crate.

“When they starting to shake, you know it is going to break,” he said of the man in the video. “His new name is Chesta because his chest-a hurt tomorrow.”

Comedian Conan O’Brien joked how he needed federal officials to give the challenge the okay before he went ahead with it – a nod to the Food and Drug Administration granting full approval to the Pfizer-BioNTech coronavirus vaccine Monday.

“Waiting for FDA approval before I take the Milk Crate Challenge,” O’Brien tweeted.

The comedian’s tweet prompted the FDA to discourage people from taking the challenge: “Although we regulate milk, we can’t recommend you try that. Perhaps enjoy a nice glass of 2 percent and return all those crates to the grocery store?”

While many of the videos shared widely online have been of violent falls, a few have highlighted people who were able to topple the Milk Crate Challenge without toppling over. One in particular was a woman who successfully climbed a pyramid of milk crates – and she did it wearing heels.

When asked by The Post about how long he thinks the challenge could go on for, Derek said it’s a phenomenon that he anticipates lasting through at least the end of the summer. He acknowledges the videos to be entertaining, but wishes that people would stop hurting themselves.

“Nobody is going to stop people from doing this Milk Crate Challenge,” he said.