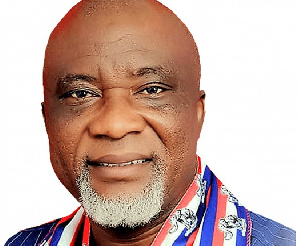 One of the Conveners of Fixing the country movement, Hopeson Adoye

One of the Conveners of Fixing the country movement, Hopeson Adoye has claimed that some members of the rival group, Fixthecountry movement, have visited a shrine in the Ashanti region to eliminate them for embarking on a counter campaign.

Hopeson Adoye alleged that these unnamed leaders of the Fixthecountry movement were charged heavily by the fetish priest. However, they pleaded for more time to raise the agreed fee due to their inability to gather the money as of the time they finalized the deal.

The meeting, he said, was held at the Golden Tulip hotel in Kumasi.

Hopeson said the Fixthecountry conveners will face the consequences if they go ahead with their action.

“This is a contest of ideas we are engaged in and you go to a shrine to kill us.

“They have gone to see a fetish priest in Ashanti region to kill us through road accident. We dare them to go ahead and see what will happen to them. It will not work one bit, I am saying this on authority,” he said on Net 2 Monday August 23.

“That is what we want and you now resort to juju to scare us? No way, we are not scared one bit.

“Fixing the Ghana movement will continue to explain the good works of the president and let Ghanaians know all the projects undertaken by the president,” he added.

Conveners of Fixthecountry movement are piling up pressure on President Nana Addo Dankwa Akufo-Addo and his administration to deal with the fundamental issues facing the country and the governed.

On Wednesday August 4 hundreds of Ghanaians joined their demonstration in Accra to demand better conditions of service from the leaders.

Dozens begun the protest march from the Obra Spot.

Most of the protesters were in red with a few draped in the colours of the national flag.

From the Obra Spot, the protesters used the Farisco Traffic Light road at Adabraka through the TUC-Kinbu road and then ended up at the Black Stars Square.

Fixing the country movement have also served notice to embark on a nationwide demonstration to let Ghanaians know the work done by the president so far in addressing the problems that the people are saddled with.