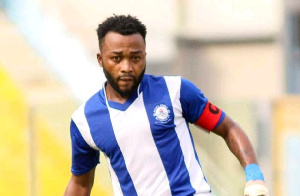 The midfielder completed a protracted move to the Ghana Premier League champions last week after month’s of speculation.

Awako wrote “‘It’s with mixed emotions that I am writing this message. To everyone at Accra Great Olympics Football Club.

“The owner Mr Amakai who brought me here, to my teammates who helped me, to the staff who made my time here so easy and to all you fans who made me feel so special week in week out.

“It has been an incredible journey and it is with great sadness that I must say goodbye. I will miss you all and wish you the best of luck for the future.’ Thanks for everything”

The former Ghana U-20 star returned home after a stints in DR Congo with TP Mazember and Don Bosco while he also played for USL side Phoenix Rising among others.

Gladson Awako was outstanding in the 2020/21 season despite facing lots of doubts prior to the start and went on to contribute 13 goals for his club in the league, scoring 6 and providing 7 assists.

Awako since joining the ‘Dade’ outfit has made 43 appearances, scoring 10 goals and providing 12 assists. His stellar display has saw him won six man of the match awards including two player of the month accolades.