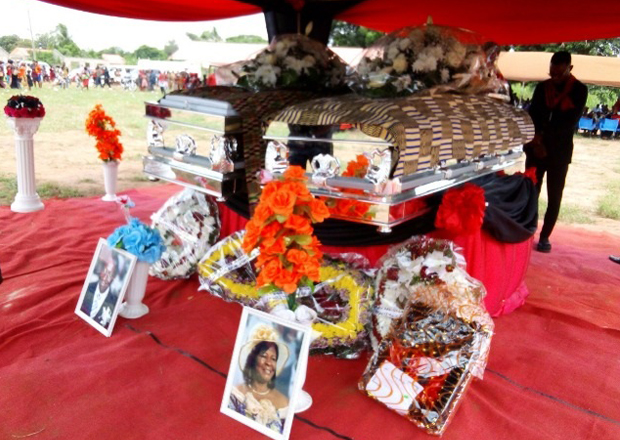 The mortal remains of Apostle Augustine Gbedema, Founder and leader of Harmony With Jesus Ministry International, and his wife, Pastor Comfort Gbedema, have been laid to rest at Ayitikope in the Akatsi South Municipality of the Volta region.

Apostle Gbedema and his wife were allegedly murdered by some unknown assailants in their private residence at Atitikope and their bodies were discovered on July 24.

The Police have since begun investigations into the crime but no arrest has been made so far.

A solemn funeral service, held at the Ayitikope Junior high school park, attracted hundreds of mourners from across the country, including members from the clergy, traditional leaders, media practitioners, church members and other family relations.

In a sermon, Apostle R.D.K. Dovor, Founder and leader of Apostolic Vision Church International, encouraged believers to keep their faith in God and move according to the teachings of Jesus Christ.

Apostle Dovor said one must never be afraid of death since he or she would resurrect and see the father in heaven.

He said the wickedness of any individual towards one another was punishable by God.

In a tribute, the church described their late founder and the wife as leaders who ensured that the Church was firmly rooted in the principles and teachings of Christ.

“Their teachings and preaching revolved around purity, righteousness, adherence to Christian virtues, and above all obedience to God. The in-depth knowledge of the Gospel that Apostle Gbedema had, made him deconstruct seemingly controversial verses in the Holy Bible with ease.”

There were tributes from both families, their daughter, PBC and others.

The late Apostle Augustine Gbedema was born in Ayitikope on February 13, 1951.

He trained as a teacher at Anlo Training College at Anloga between September 1968 and July 1972 and later entered the University of Ghana, Legon where he read BA Geography and Government.

Apostle Gbedema later did his national service at the Produce Buying Company (PBC), where he got permanent employment status as producer officer before being promoted to a District Manager status where he worked in many Districts across the country.

The late Gbedema did not leave out God through the journey of life. He got baptised at Avenorpedo on January 8, 1969 by the Evangelical Presbyterian Church.

He later joined the International Gospel Church while in Accra, where he met Comfort Atsah, a trained teacher.

On January 14, 2015, he was ordained as an Apostle in Accra after he co-founded Harmony with Jesus Ministry International with his wife, Pastor Comfort Gbedema on August 17, 2014, following their divine call.

The late couple subsequently settled permanently in Ayitikope from 2016 where they had since been until they met their untimely death.