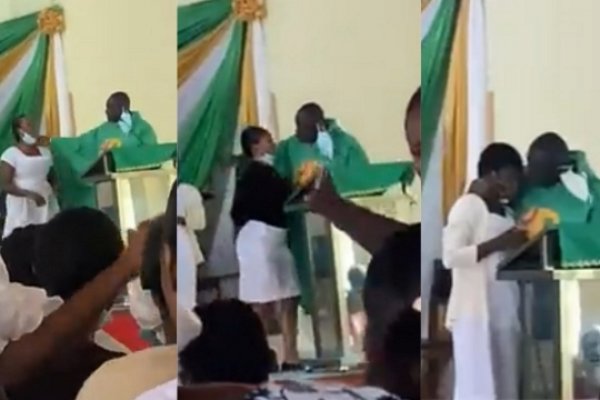 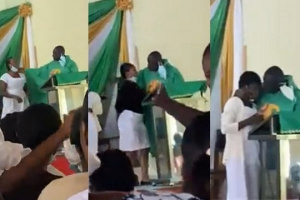 Screnshots of Father Obeng Larbi kissing his students in church

The Ultimate Women Foundation has condemned the act of an Anglican Priest and Chaplain of the St Monica’s College of Education at Asante Mampong, Reverend Father Baltharzar Obeng Larbi, calling for an expeditious investigation into the act.

It described the behaviour of the priest as despicable, unfortunate, unacceptable, and an indictment on the dignity of women.

A viral video on circulation identified Rev. Obeng Larbi, the College’s chaplain kissing some female students of the college during a church service and the Anglican Church had since relieved the priest of all his duties pending the outcome of the investigations.

In a statement issued and signed by Dr Freda Prempeh, the Member of Parliament (MP) for Tano North and Patron of the Foundation said “we hereby seek to emphatically condemn this despicable act and plead with Ghanaians especially females within our various institutions to desist from condoning such acts”.

The foundation is a women non-governmental organization that seeks to encourage and motivate women to know their worth as well as empower them to improve on their socio-economic livelihoods and position them well to contribute to the development of society.

“When women are uplifted, they give back to the world by fulfilling roles, getting jobs, and working for equality on a global scale”, a copy of the statement made available to the Ghana News Agency in Sunyani indicated.

“Also, that these women will possess the tools to provide a better life for themselves and their families and they have the hope, opportunity, and ability to control their lives and futures”, the statement indicated, saying “we find it rather unfortunate that some of these female students seen jubilating in the video, obviously, finding no fault with the actions of the Priest”.

“It is indeed high time that we as Ghanaians become our brother’s keeper. Change must come from within and definitely from one another.”

It said, “it is imperative the government and NGOs collaborate to champion the course of women empowerment and continually create and heighten the awareness of their self-worth and value to our society”, it added.

The statement, however, commended the Anglican Church for asking the Priest to step aside and expressed the hope that thorough investigations would be conducted into the act accordingly.