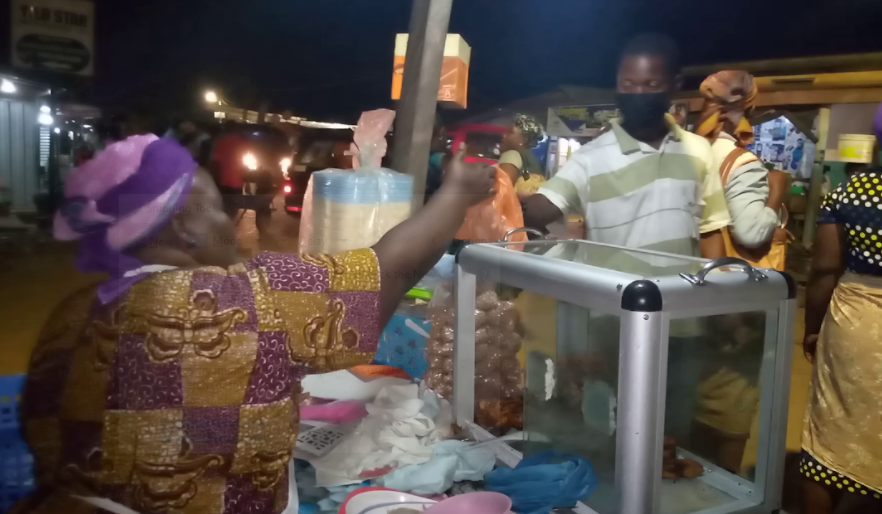 A lot of family businesses are passed on from one generation to the next, and for this modest Ghanaian family, the trade has been over three decades of selling ‘Kelewele’.

Kelewele, a snack made from deep-frying spiced ripe plantains, is arguably one of the people’s favourite snacks in town, especially when taken with groundnut.

One of such hot kelewele stops is no other place than at the Agomanya taxi rank in the Eastern Region.

There, you’ll meet one Kelewele seller, famous for her trade over the past three decades.

It is intriguing to know that behind the popular tasty snack, is a family history spearheaded by Mame Korkor Aguddey, mother of Juana Mandey Agudey who currently runs the business having taken over from her now old mother.

Juliana who is the eldest among five children revealed in an interview with GhanaWeb that the business has existed for this long due to its deliciousness which many have come to associate with the family’s trade.

Helped by her fourteen-year-old daughter this evening, Auntie Julie recalled how she similarly helped her mother during her junior high school days. “I learnt it from my mother and I’m continuing it,” she disclosed.

46-year-old Juana Mandey Agudey has been in charge of the business having taken over from her mother who started it in 1988. Mame Korkor Aguddey, now 70-years-old, begun the family’s trade some 33-years ago as one of several businesses she ran to cater for her children.

She was able to see her five children grow up through profits she made from her trading activities.

As a school girl, the young Juliana used to assist her mother in the running of the business, eventually learning the vital skills of the art of frying the snack, from her.

“My mom taught me how to do it,” said Auntie Juliana from behind her kelewele setup this Wednesday evening by the roadside near the Agomanya market.

It’s just about 7pm and she’s already 4 hours into the day’s business having set up at 3pm. As customers stopped by her table, it was obvious what they wanted, their favourite snack.

As she served them gleefully, she still made time to share her three-decade-old kelewele story with GhanaWeb.

Asked what motivated her to take up the trade from her mother, the mother of three said she was driven by her passion to work. “As a human being, you have to work. My mommy is old enough before she gave birth to us,” she said.

All manner of persons, including drivers, nurses, teachers, traders, students, etc. patronize her kelewele, either as dessert, snack or even as lunch or supper.

She describes what she does as profitable through which she caters for herself and her children. All of her children are receiving education through proceeds from her venture.

But just as every business, there are ups and downs in selling kelewele as well. Auntie Juana’s biggest setback is the occasional shortage of plantain on the market and the rising cost of the commodity.

But what makes her kelewele special and everybody’s favourite remains her secret. “It is a secret,” she said abruptly when asked what ingredients she uses to make her kelewele. The other “secret” however, she disclosed is her good relationship with those who patronize her trade.

According to her, the feedback from her loyal customers of many years is good as they compliment her for her culinary skills: “They say it’s good, it’s sweet, I know how to do it well.”

But she’s not so enthused about allowing her children take after her someday. According to her, she wants her children to become “lawyers, nurses and police,” adding that she won’t allow them to sell.

Do you want to know one good combination to go with your kelewele? Auntie Juliana says its rice. “It [kelewele] is good, if you add rice to it, marvelous. It is very, very good because some ingredients are inside that are good for the human body,” she noted.

GhanaWeb spoke with an ardent patron of Auntie Juliana’s snack as she helped herself to the tasty spiced ripe plantain. Having patronized her favourite kelewele for the past four years, she said it’s simply her favourite.

But she has a preference for Auntie Julie’s spiced, ripe plantain, saying, “[I buy from her] because of the pepper and spices, that’s why I prefer buying from her.”

According to her, she refuses to patronize any other kelewele if her favourite is unavailable.

For 45-year-old Joseph Kpabitey, a shoe-maker said his proximity with the kelewele seller makes it even easier to access his favourite snack.

Describing it as “good”, he said taking it as dessert with his family is almost a daily routine and encouraged others to do same.

“I love buying from here because her kelewele tastes good. After my supper, I eat the kelewele before I sleep so I buy it on my way from work every day because we are at the same place,” said Mr. Kpabitey. “I also observe how a lot of people buy from her and they love it just as I do so those who are yet to taste her kelewele should give it a try, that’s why I buy from her always.”

He added: “I don’t buy from other sellers because I prefer hers and anytime I buy from her and eat, I realize I’ve bought something good.”

When next you enjoy the famous Agomanya taxi rank Kelewele with some roasted groundnuts, know that you are part of a great tradition of discerning kelewele lovers.