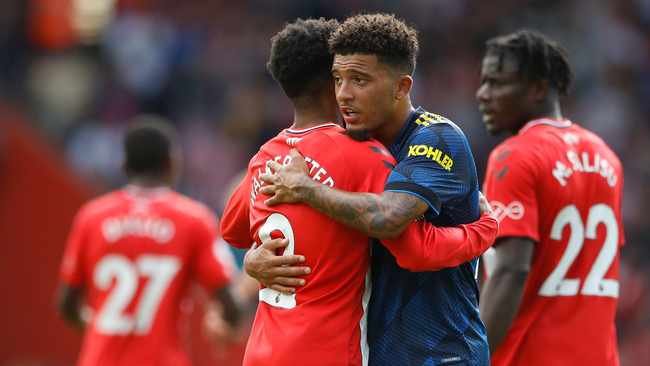 SOUTHAMPTON – A second-half strike from Manchester United forward Mason Greenwood cancelled out an own goal from team mate Fred to earn a 1-1 draw at Southampton in the Premier League on Sunday.

United had a euphoric start to the season with a 5-1 home win over Leeds United but could not repeat that performance and were lucky not to lose to Ralph Hasenhuttl’s organised and dynamic side.

Southampton took the lead on the half-hour mark after a bright spell when Jack Stephens dispossessed Bruno Fernandes in the United half and the hosts swiftly moved the ball towards Che Adams, whose shot took a heavy deflection off Fred to squirm inside the near post and past David de Gea.

United defender Harry Maguire had hit the crossbar early on with a looping header while Anthony Martial’s rebound was scrambled off the line by Mohammed Salisu but the half had belonged to Southampton, who swarmed over United with an aggressive high press and caused havoc down the right hand side.

Ole Gunnar Solskjaer’s side levelled early in the 55th when Greenwood thumped a low shot under Southampton keeper Alex McCarthy after clever interplay between Fernandes and Paul Pogba, who added another assist to the five he notched against Leeds.

Southampton finished the game strongest though and Adam Armstrong missed two clear chances to win it, first being denied by a fine save from De Gea following another speedy transition and then failing to steer an Adams flick on towards goal following a corner.