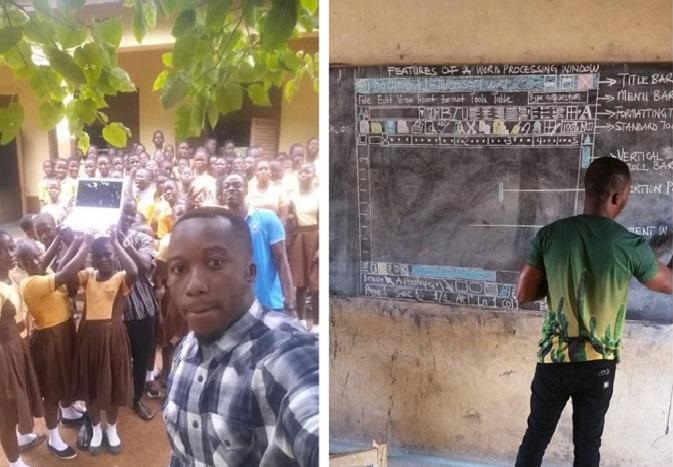 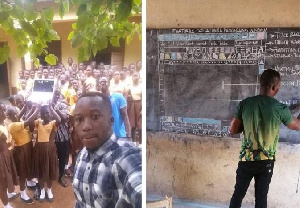 Hottish with his pupils (left) and him in class

Owura Kwadwo Hottish, a teacher in rural Ghana who became a viral hero on social media for his innovative means of teaching Information and Communication Technology, ICT, to his pupils; continues to expose the hustle that he encountered at the hands of some Ghana Education Service officials.

Hottish’s decision to draw a Microsoft Word Processing interface on a chalkboard in order to give his pupils a feel of how a computer looks, earned himself not only applause on social and in traditional media but also logistical support for the community he was serving in.

In a second Facebook post leveraging on the #FixGES campaign by fellow teacher and comedian, Teacher Kwadwo, Hottish recounted how a Microsoft sponsored trip to Singapore in 2018 was nearly torpedoed by a GES official.

In his first post earlier this week, he narrated how he was summoned to the GES district office and instructed, having exposed the infrastructure deficit, to write a report he called a ‘propaganda piece’ for the then Acring district director, which he obliged at the time.

Continuing from where he last left off, it seems, he wrote in an August 19 post on Facebook: “On that same day, I had with me a letter from Microsoft (in) which they were demanding a signature to process my traveling to Singapore.

“I still kept my cool and went back to Sekyedomase and called my assistant head teacher to append his signature and I sent the letter to Microsoft for processing. Just few hours, I was sent my plane tickets to travel to Singapore the next day. (Sampson Lardi, then with BBC Africa, Ohemang Tawiah of Nhyira and Luv Fm and the MCE were all aware of her action).”

Even after returning from his trip, which ostensibly had not been sanctioned by the district director, he still had a query for failing to report in time to school leading to a probe that has since 2018 not taken off.

“I returned from Singapore on a Saturday afternoon and proceeded to Sekyedomase on Monday to continue my teaching, on my way, I had a call from my colleagues and they wanted to know my whereabout and I told them, I’m on my way to Sekyedomase.

“Their reason for calling was that, the acting director has called them to find out if I was in school. When I got there, I was told she has come to log in the log book that, I left school without permission. Till now, nothing has happened and still at post teaching,” he added.

Thanks to going viral, he got support from tech groups who donated enough supplies to ensure that Sekeyedomase has two ICT laboratories that now ensures that pupils will get a first-hand feel of the practical aspect of their ICT lessons.