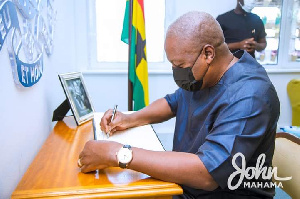 The #FixingTheCountry Movement says it views claims by former President John Dramani Mahama that elections are won at the polling stations and not the Supreme Court as hypocritical and disingenuous.

The group is bemused that the 2020 Presidential Candidate of the National Democratic Congress (NDC) is making such a statement several months after he held the entire country to ransom with a Supreme Court action.

Former President Mahama had made the pronouncement during his ‘Thank You’ tour in Bolgatanga in the Upper East Region.

“Fixing The Country Movement is very much aware that these shenanigans have everything to do with Mahama’s 2024 comeback,” Convener of #FixingTheCountry Movement Ernest Owusu Bempah said in a statement.

“It is meant to keep him relevant for the inevitable 2024 comeback. It is a fact and we know it. But it won’t fly.”

Fixing The Country Movement has taken note of political rhetoric by former President Mahama camouflaged as commentary on his so-called “thank you tour in Bolgatanga in the Upper East region.

It is purely hypocritical and very disingenuous for Mr. Mahama to be running around with the claim that Elections are won at the Polling Stations and not at the Supreme Court, several months after holding the entire country to ransom with his Supreme Court action.

Mahama actually launched a scathing attack on our democracy after his electoral loss and even encouraged his supporters to engage in violence. He only proceeded to the Supreme Court after good counsel from right-thinking Ghanaians. And today he’s claiming he went to the court purposely to calm his supporters down.

What an irony! We’re scandalized. We are really witnessing the death throes of a spoilt narcissist and someone needs to pull him aside and tell him that it is not enough to shout stolen verdict without backing his claim with evidence, and lost miserably in court, and now come back to ascribe other motives to the court action.

The level of incompetence, dishonesty, and disgrace that has saddled Mahama and his politicking has been brought to bear once again.

Mahama thinks talking his way to the hearts and minds of Ghanaians will give him power. We have not forgotten the substandard governance we suffered and endured under his tenure.

We have always known John Mahama to be the bloodiest desperado in our political space but watching him take his shenanigans to dizzy height on his so-called “thank you tour” and his attempt to deny his involvement with the Fix the Country protest makes us feel like the man is gone with the wind. Mahama is looking and sounding so miserable and desperate. And he’s simply dancing naked in front of the intelligent public.

Truth be told, Mahama’s porous attempt to explain away his role in the mercenary activities of the Fix the Country campaigners is typical of the belly giggling squealers in George Orwell’s Animal Farm.

Indeed, the Fixing The Country Movement is aware of Mahama’s promises of top government jobs to the leadership of the Fix the Country campaign in the unlikely event of him becoming a president.

As clear as we can see, Mahama is a coyote that eats its own leg. He has nothing to offer Ghanaians but thinks he can sugarcoat his way into the hearts and minds of the unsuspecting public.

Indeed, we are wary of a naked man offering us a shirt.