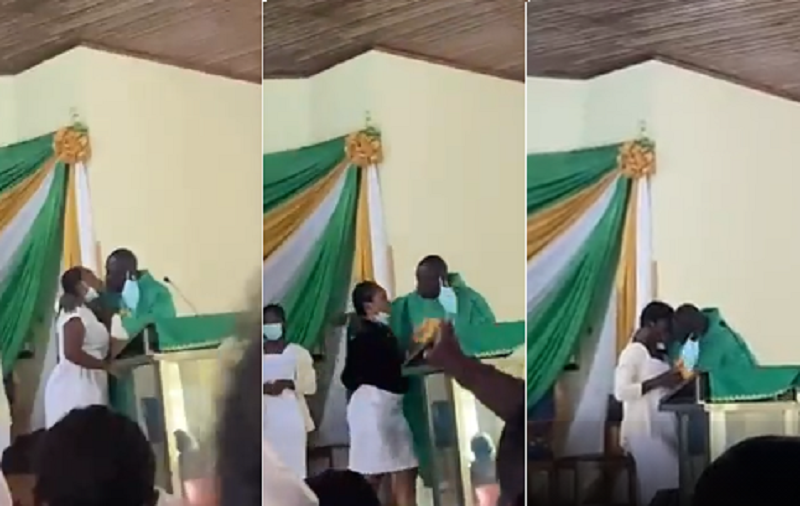 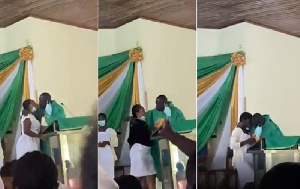 The International Federation of Women Lawyers (FIDA) has condemned an Anglican Priest, who was seen in a viral video kissing female students of the St. Monica’s College, Asante Mampong during Church Service.

The Priest, Father Balthazar Obeng Larbi, who is the Chaplain of the College and a Lawyer, was seen in a video kissing the three female students, one after the other, even though some visibly did not like the act.

A statement issued by FIDA-Ghana, Wednesday, and signed by its President Afua Brown-Eyeson, said screenshots of chats allegedly posted by students of the same school claimed that the incident was only a reflection of the modus operandi of the said Reverend Father.

“Quite disturbing to watch was the jeering and excitement on the faces of onlookers, which in no doubt emboldened the perpetrator to continue kissing the girls. Sexual harassment and sexual abuse is no laughing matter,” it said.

The statement said it was time to challenge the culture of entitlement and abuse by clerics because for far too long, the issue of sexual harassment had been at best sidelined and at worst silenced in the church.

“It is now time to challenge cultures of entitlement and abuse of power by clerics, which plague women and girls in religious settings. The reality though is that sexual harassment and abuse by clerics has been in the news for quite a while due to undue influence, duress and fear of religious authority.

“Though religious authority is regarded highly in Ghana, it should not be used as a cloak to oppress and abuse women and girls who most often need the protection of these clerics,” it noted.

Needless to say, the statement said sexual harassment was gender-based violence and a violation of the human rights of girls and women and is prohibited in the 1992 Constitution, the Domestic Violence Act and the Labour Act.

The Labour Act, 2003 (Act 651) defines “sexual harassment as any unwelcome, offensive or importunate sexual advances or request made by an employer or superior officer or a co-worker, whether the worker is a man or woman.

The effect of sexual harassment in the academic and professional lives of women has in most situations denied women of their rightful places of merit and contributed to the huge gender gaps in education and the workplace, thus the need for the Affirmative Action Law.

FIDA-Ghana applauded the Anglican Church of Ghana for taking the matter seriously and relieving the Rev. Father Larbi of his duties and as well providing counselling for the girls.

The Federation encouraged women and girls who had been sexually harassed in churches to come out with their experiences to raise awareness of the despicable acts.

Being mindful of the possibility of being stigmatised for speaking out, FIDA Ghana entreated the public to report such incidences to its Gender-Based Violence number or Whatsapp platform 0554121205 and website on [email protected]

These platforms, the statement explained provided the opportunity for victims of violence to report such acts whilst providing a trained lawyer to attend to their legal needs.

FIDA-Ghana also appealed to the media and individuals to be circumspect in sharing the video to protect the identity of the girls as victims.

It also called on leaders at every level within religious Institutions to initiate changes and to establish and maintain a culture that abhors sexual harassment and sexual misconduct.

“To make this work, we call on members of religious institutions, students, faculty, staff, and administrators to assume responsibility for promoting a harassment-free environment,” the statement added.