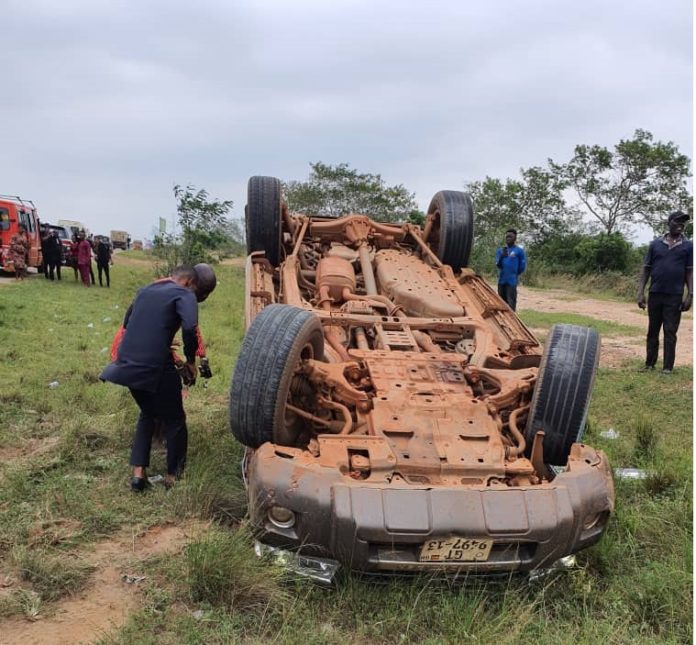 NDC Member of Parliament (MP) for South Dayi, Rockson-Nelson Dafeamekpor has reportedly been involved in a road accident.

According to a citinewsroom report, the South Dayi MP who doubles as a member of Parliament’s Constitutional, Legal and Parliamentary Affairs Committee escaped unscathed despite the gravity of the crash.

The accident which occurred on Saturday, August 14, happened on the Aveyime road in the Volta region while the legislator, together with some colleague MPs were returning to the Greater Accra Regional capital.

Citinews sources indicate that they were enroute to Accra after going to support MP for North Tongu, Samuel Okudzeto Ablakwa following the demise of his father.

The report furthered that a KIA truck loaded with concrete blocks ran into the MP’s vehicle, resulting in the simultaneous somersaulting of the car.

Member of Parliament for Ashaiman, Ernest Norgbey who was part of the team from the funeral narrated the incident to citinews.

“We were travelling from the funeral of the father of the MP for North Tongu, Samuel Okudzeto Ablakwa. We were on our way to Accra when a KIA truck loaded with blocks just crossed the convoy. Rockson’s car somersaulted twice with the four wheels up. So we had to rush him out of the car. As we speak now, he is doing well, and we are on our way to the hospital to seek medical treatment,” he noted.