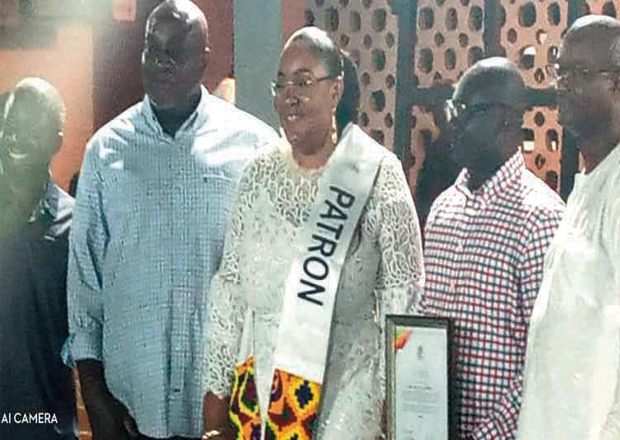 Naa Torshie (in sache) with other executives

Her induction was to help revolutionise and improve infrastructure at the Sakumono Tennis Club.

The four members with diverse backgrounds have been contributing to the development and renovation of the club court.

Speaking during the induction ceremony, President of Sakumono Tennis Club, Henry Akwaboah of Engen Ghana Limited said, “I would like to personally thank our tennis family from 4 Garrisons Officers Mess for accepting our invitation to grace the occasion of the inauguration of our courts.

“I believe events of today have only consolidated the bond and friendship that exist between the two clubs. We promised to have fun and yes, we have. We also promised we will win and yes, we have. It’s always been our desire to fix the cracks on our old courts.”

“It took a lot of sacrifice from so many, and we are truly proud of what we have achieved. We did not settle for fixing the cracks but went beyond our own expectations to deliver brand new courts and a refurbished club house. This would not have been possible without the great support from individuals and corporate bodies such as Naa Torshie.

“Big thanks goes to MD of Core Construction, Frank Lartey. You all contributed to show that everything is possible if we are willing to work towards it. Now we can begin to dream bigger in our quest to have a multipurpose centre that will house a modern club house,” he added.

Akwaboah stated, “The decision to induct the four as patrons was necessary to open the club to more development options and in the spirit of appreciation to help increase opportunities available to the club to grow.”

The weekend event was sponsored by Engen Ghana Limited and Skynet Express.