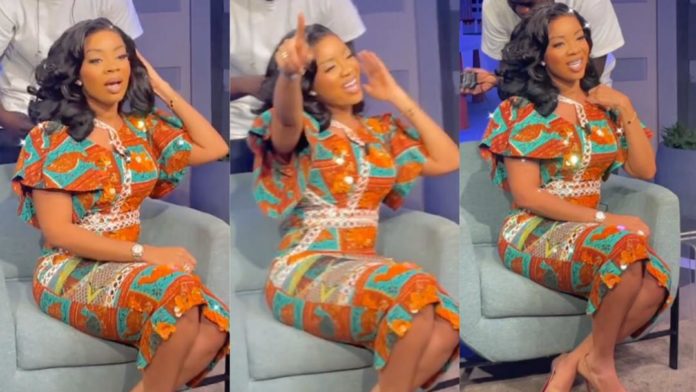 Serwaa Amihere does not give a damn about all the rumours that erupted yesterday that sought to throw dirt on her person and paint a bad picture of who she actually is.

A faceless snap chatter dropped all sorts of unverifiable allegations against the GhOne TV presenter…allegations about her affairs with politicians amongst others.

Well, Serwaa Amihere does not seem to be perturbed about all the rumours and allegations. In fact, she has been in the Twitter trends for close to 24 hours.

While some believe that all the rumours about her might be factual since there’s a bit of truth in every rumour, others think the faceless snap chatter is just a bitter person who has raised bogus unsubstantiated allegations against the eloquent journalist for the sake of it.

In a tweet, Serwaa Amihere has sent a clear message across to all her critics who are pointing fingers accusingly at her.

She earlier shared a personal devotion from a stoic she reads which sort of put her troubles into proper perspective…she certainly will draw some inspiration from the words to start her day.

Serwaa Amihere then came back with a video of her preparing to go on set to host the GhToday programme on GhOne TV.

She is seen jamming to Fameye’s “Praise” song…part of it speaks about the fact that she does not need to pay attention to what people are saying about her. All she needs to do is to remain focused.

Serwaa Amihere has been the talk of the town for all the wrong reasons in recent times but this time, her reaction is one that kinda says “I dunno give a f*ck.”