GH¢5 million Worth of ‘Cannabis’ Intercepted In Volta 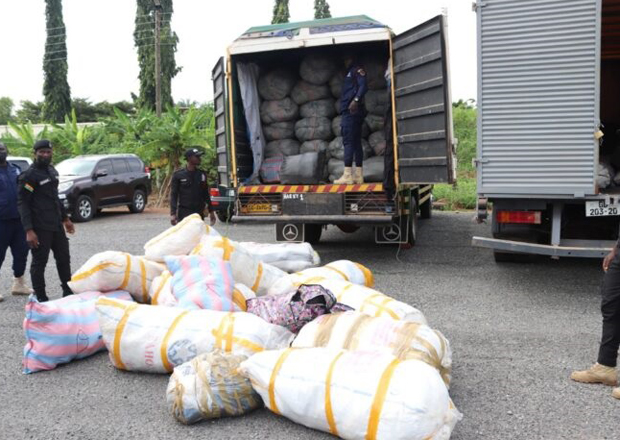 A joint operation between the Narcotics Control Commission (NACOC) and the Volta Regional Police Command has led to the interception of 9,752 slabs of cannabis worth GH¢5million.

The joint operation, conducted in Ho, the capital in the early hours of Tuesday, August 10, 2021 follows painstaking intelligence work and partnership by the two organizations.

The Public Affairs Officer of the Volta Regional Police Command, Inspector Prince Dogbatse and Head of Communications at NACOC, Francis Opoku Amoah, told DGN Online that the substance which was compressed into slaps and oval shape with sticky tapes were being moved from Dzemeni in the South Dayi District to the southern part of the region through Ho, the capital.

Unfortunately for the dealers who were conveying the banned substance from Dzemeni through Ho to the south, the joint team intercepted them. They bolted and left behind the Mercedes Benz truck they were driving. The vehicle had the registration number GC 3690-09 with the inscription: “HASKY 1’’, at the back.

The slaps were packed in 128 sacks with no cover load when the truck was intercepted in Ho. Further investigations have since commenced, Mr. Opoku Amoah noted.

DGN Online intelligence from residents in the Dzemeni suggests that the area, especially the over bank (the area that lies along the Volta River) and other hard to reach areas is noted for high cultivation of Indian Hemp, especially the premium breed.

Other parts of the region where Cannabis are known to be cultivated include Afadjato South, Hohoe and Alavanyo districts. The substance is usually carted through the Southern part of the region to enter Lome, the capital of neighbouring Togo or to enter the national capital of Accra for onward nationwide distribution.

About a year ago, NACOC in collaboration with the Ghana Navy intercepted 12,555 compressed slabs of cannabis near Keta (Southern Volta) in the Volta Region.

The slabs which were packed into 159 sacks and had a street value of about GH¢12 million is believed to be the largest single haul of cannabis in the country, the Commission averred. 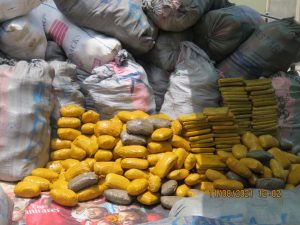 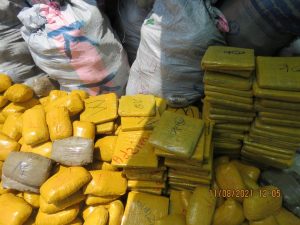