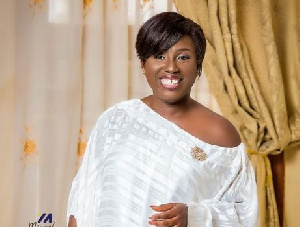 Diana Hamilton is the reigning VGMA Artiste of the Year

Renowned Ghanaian stand-up comedian and optometrist, OB Amponsah, has disclosed that at some point in his comedy career, he almost called it quits until he heard Diana Hamilton’s song ‘Adom’ which gave him a change of mind and heart.

He shared with Happy98.9FM on Xtra a list of some of his favorite songs, which included ‘Adom’ however, it was after host, Doctar Cann played the song and asked him why he loves that song that he made this revelation.

“I like songs that are not complaints and songs that will lift my soul. Adom, for instance, is one of such songs because I got to a point in my career where I wanted to quit comedy because I went to bomb on stage one time”, he explained.

Other songs among OB’s six-track favorites list were Manhole by Pure Akan, one of Ghana’s most talented but underrated artistes, Faky3 by Mark Anim Yirenkyi, Behind the Scenes by Kofi Kinaata, Praise by Fameye and Lonely by JMJ.

Born, Obarima Amponsah, OB is a professional optometrist and a fast-risen comedian in the Ghanaian entertainment industry who has performed with the likes of Basketmouth, Foster Romanus, Okey Bakassi, Bovi and other great comedians in Ghana and across Africa.